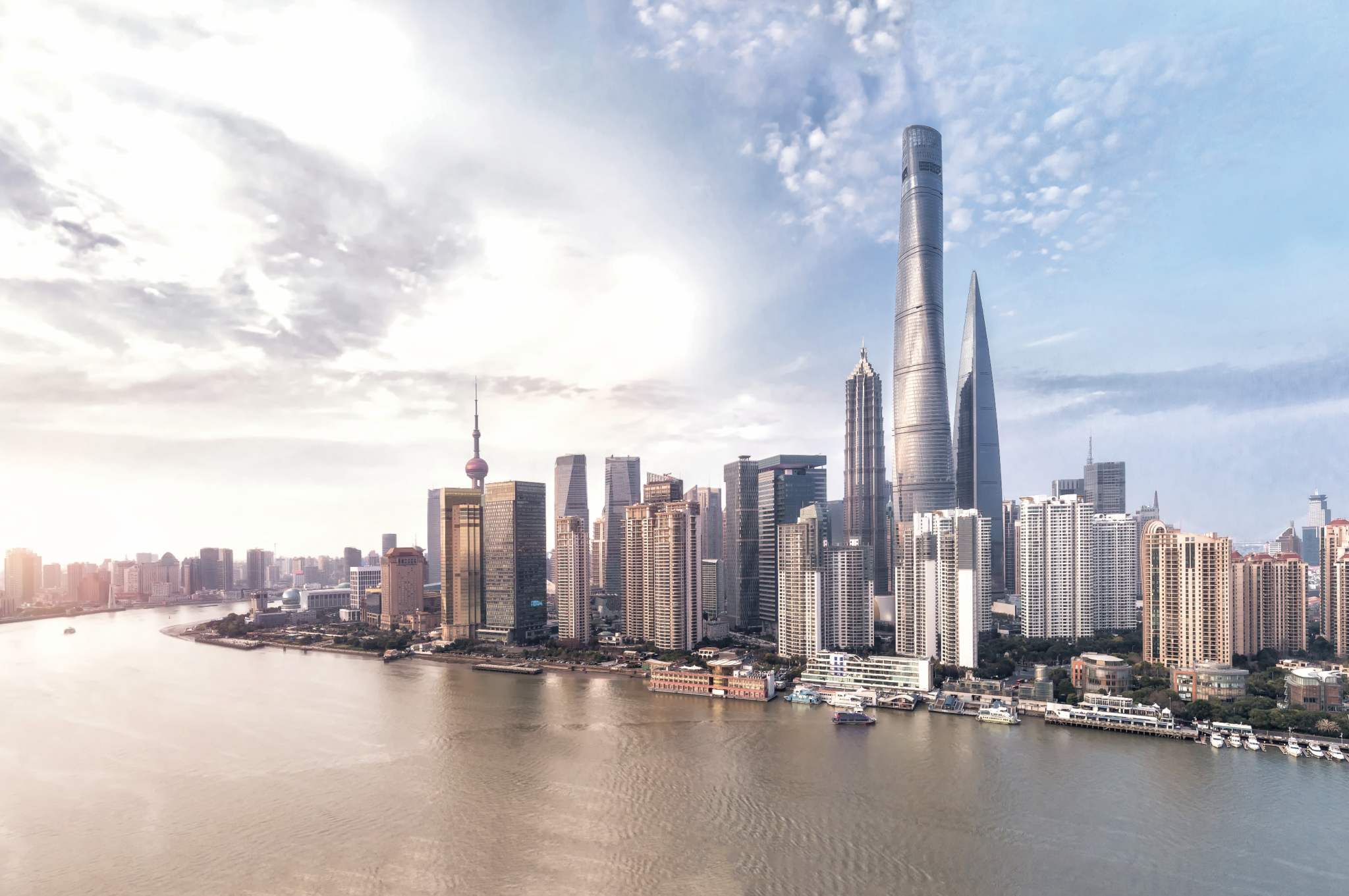 Global businesses need to understand how the Asian superpower has thrived – and what its future might hold.

Few countries demand the attention of global companies’ senior executives quite like China. Its market size, its continued growth and its importance to global supply chains make it hard to ignore. Its GDP growth of 2.3% in 2020 (as reported by the International Monetary Fund, April 2021) indicates a strong post-pandemic recovery – a performance which is all the more remarkable when compared with the negative growth experienced by the rest of the world in 2020. In the first quarter of 2021, China’s GDP grew by a record 18.3% in comparison to the same period the year before.

China has come a long way since the start of its reform and ‘opening up’ policies some four decades ago; in fact, its GDP has grown over 200 times across this period. It is set to overtake the US as the largest economy in the world before the end of this decade. Despite this, many people over the years have cast doubts on whether China’s growth is sustainable. Perhaps the most quoted narrative has been that of a 2001 book, The Coming Collapse of China, which predicted that China would collapse in the “near future.”

Yet China has delivered continued economic growth without showing any signs of imminent collapse, despite a rather challenging geopolitical environment and a pandemic. Why has this been possible? The answer lies in a three-layered system of economic development which has guided government and enterprise over many years. It’s time for global businesses to truly understand why China works – and to assess how geopolitical developments may shape its future role in the global economy.

After a rather tumultuous first three decades, the People’s Republic of China (PRC) began its reform under Deng Xiaoping at the end of the 1970s. While retaining key aspects of the state planning system, Deng began to experiment with elements of a market economy to create “capitalism with Chinese characteristics.” This included allowing the return of entrepreneurship, which has become a key component of China’s economy and the most important source of commercially applied innovation. The central government continues to play a significant role in steering the economy and helping the country to develop at a sustainable pace, but China is no longer just a state economy: the private sector has become increasingly significant.

That is especially true in today’s digital economy. For instance, the government has allowed two private companies – Tencent and Alibaba – to create and dominate the country’s online payment system. China’s third-party payment transactions have reached ¥280 trillion (about US$44 trillion), of which over 80% are paid through Alipay and Tenpay. It is an example of the central government’s willingness to coordinate with private businesses to put much-needed innovations to work for the country. Collaboration with private enterprises will continue to be essential as the government prepares to launch its central bank digital currency (CBDC).

The interaction of central government, local governments and the private sector amounts to a three-layered model for China’s economic development (see graphic 1, below). 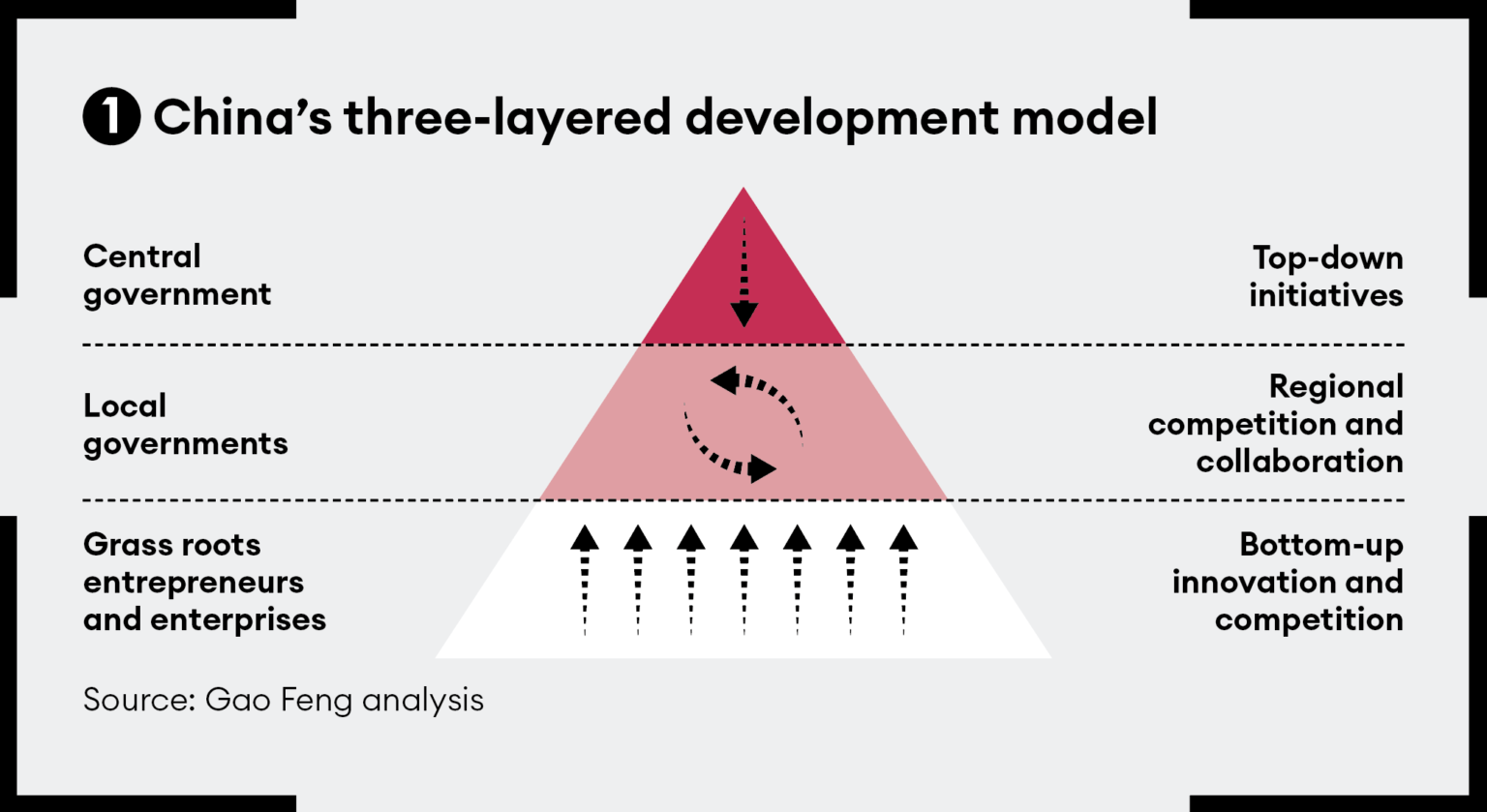 In addition to this three-layered structure, China has a unique dual economic structure, comprising state-owned enterprises (SOEs) and privately-owned enterprises (POEs). While there are sometimes conflicts between companies from these two sectors, they also co-exist in symbiotic relationships, with SOEs providing public goods, such as infrastructure and environment-improvement measures. A good example is the development of the world’s most extensive high-speed railway network, built from practically nothing, in just over a decade. Such achievements are possible because these enterprises do not evaluate mission-critical infrastructure projects only on narrow economic viability. Both Chinese people and businesses, including foreign companies, benefit from such infrastructure.

We call this system a ‘three-layered duality.’ It is an approach which requires constant juggling of various components to make it work. It is experimental by nature and therefore requires a strong degree of overall orchestration, plus shared vision and values from those who participate. As a result, it has an innate ability to self-adjust over time – as seen in the emergence of China’s innovative private sector.

China has developed a strong reputation for innovation. Broadly speaking, there are two strands of innovation. One is technological innovation which is primarily driven by the government. This includes programmes such as space missions (including lunar and Mars probes), deep sea exploration, developments in quantum computing and many others. The other strand is tech-enabled innovation in commercial applications. Prime examples are found in e-commerce, online payment and smart logistics, as well as in the automotive and mobility sectors. Private businesses play a major role in this sort of innovation, often in collaboration with local governments.

The three-layered interplay between central and local governments and both SOEs and POEs is evident in many fields. For instance, with the US government’s sanctions on high-end semiconductor chips hitting Chinese manufacturers, China has launched a major initiative to develop self-sufficiency in high-end chip supplies. The central government, many local governments, and various SOEs and POEs are involved in various ventures aiming at creating breakthroughs.

The Covid-19 response provided another very visible example. During the lockdown of Wuhan city in early 2020, two emergency hospitals were built in as little as ten days. China was able to achieve this because as soon as the central and local governments decided that the hospitals were necessary, a large number of SOEs – together with POEs and even foreign companies – quickly collaborated. The commitment to a common goal and sharing of a vision were key motivators. To simply equate this with a simplistic ‘authoritarian’ narrative does not assign enough credit to all those who participated.

This is sometimes termed a ‘whole-of-nation approach’ – one that can mobilize resources across the entire country against a certain objective and purpose. It is based on a pragmatic balance between a sense of collective responsibility and individualism by all involved. It is a balance that has driven the unprecedented intensity and pace of China’s innovation and development, as well as its resilience. Small wonder, perhaps, that a recent survey carried out by Canada’s York University found an overwhelming 98% of Chinese citizens indicated that their trust in the national government had increased since the pandemic. The notion of the “coming collapse of China” has little chance of materializing any time soon.

Global businesses who have operated in China for some time may understand the reasons for the country’s success, although many multinationals are yet to fully grasp the impact of Chinese innovation. Some, though, are beginning to recognize what they can learn from China. One large US client told me their board of directors instructed the China team to think about how to leverage Chinese knowledge to help businesses in other parts of the world. BMW has taken its Munich-based Startup Garage programme to China to gain exposure to innovative new technologies, while Herbert Diess, chairman and chief executive of Volkswagen, said at the 2021 Davos online summit that China was “moving in the right direction” – with it now being easier for foreign multinationals to invest in China than for Chinese businesses to invest in countries such as Germany.

As Diess also noted, there is a strong relationship of dependency: “they are depending on the West, we are depending on China.” Indeed, China’s role in the world is becoming ever more important. Its internally driven development approach is moving the country towards a new era of high-quality growth that will be epitomized by more innovation and greater sustainability. However, the external environment is becoming more complicated – and it doesn’t look like this will get better anytime soon.

In determining their strategic approach to China, global companies must evaluate how the evolution of geopolitics could affect their positions. As a global power, China’s relationship with many parts of the world will be critical in the years ahead – but its most important geopolitical relationship is likely to remain that with the US.

We believe there are three potential scenarios related to geopolitics and macroeconomics which will affect global businesses, especially US businesses. The first is ‘regionalized isolation.’ In this scenario, Chinese companies will be forced out of the US market, with the Chinese government retaliating by virtually blocking US investment in China. The Chinese tech industry becomes self-sufficient and there is a widespread economic decoupling, with Chinese consumers becoming increasingly hostile towards US brands, shifting instead to local products.

The second scenario is ‘one world, two systems.’ The US and China will remain geopolitical rivals with occasional flare-ups on specific issues, but will find agreement on common interests. Intense competition in high-tech areas will continue, though stakeholders will learn to solve disputes through dialogue. Export controls and other policy measures, as well as differences in the sophistication of digital infrastructure, will see China and the US evolve into two distinct tech systems. China will expand market access to foreign firms, but with stringent data and security policies. As intelligence and connectivity become increasingly embedded in Chinese society, consumers will gravitate towards brands that can give them the desired digital experiences, tailored to local tastes, regardless of origin.

The third scenario is one of ‘co-opetition.’ The US and China remain geopolitical rivals while collaborating in certain areas of global governance. They both compete and collaborate in high-tech areas. As it grows, China will increase market access for foreign players, while exercising data sovereignty based on recognized principles of global data governance. Again, consumers seek out the brands that can tailor experiences to local tastes, irrespective of origin. In this scenario, companies’ products, services and business models have a better chance of transcending national borders – perhaps with the exception of core technology concerns.

We don’t believe a complete decoupling is likely or even possible. The ‘one world, two systems’ scenario will probably manifest under some specific conditions, while the third scenario of ‘co-opetition’ is probably more likely over the medium term – perhaps with more competition initially, moving towards greater collaboration over time.

Today, a global company’s China strategy is largely dependent on which of these geopolitical and macroeconomic scenarios it expects to pan out. China’s importance to global companies’ finances and competitive positioning will become more critical going forward, despite the uncertain US-China relationship.

However the geopolitical context develops, China will continue to generate much of its own economic momentum. Its unique and still-evolving three-layered duality development framework – the whole-of-nation approach – will provide it with significant resilience. The country should be able to continue to make major progress.

Making the right bets now on how the world will look in the coming years, and what to do in China, will define the long-term competitiveness of many companies around the world – perhaps even their survival.

Edward Tse is founder and chief executive of Gao Feng Advisory Company, a global strategy and management consulting firm with roots in China.