Master the art of reframing to make sure you’re focusing on the right things. Thomas Wedell-Wedellsborg shows how.

How much do we waste – time, money, energy, even lives – by solving the wrong problems?

Many people, especially leaders, are good at solving problems. What we tend to be less adept at, as individuals and as organizations, is making sure that the problems we solve are the right ones. At a time when organizations are beset by profound challenges, many of them pressing and urgent, that shortcoming can have serious consequences.

As I argue in my new book What’s Your Problem?, the solution is to master a skill called ‘reframing the problem.’ Fifty years of research has shown us that reframing is exceptionally powerful: people who master it make better decisions, have more original ideas, and tend to lead more remarkable lives.

To explain reframing, imagine that the tenants of an office building complain to the building owner: “The elevator is too slow!” The tenants have already framed the problem. Their framing points towards solutions that make the elevator faster, such as upgrading the motor or installing a new elevator. But the problem could also be framed as “the wait is annoying” – and that issue might be solved by installing mirrors, as people tend to forget time when given a chance to gaze lovingly at their own faces (see Figure 1). 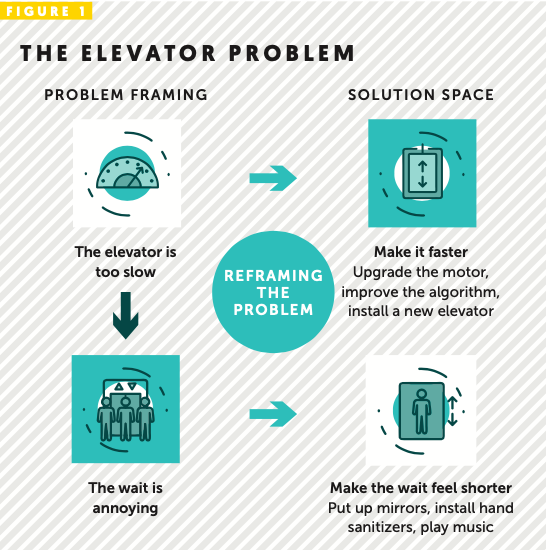 The example illustrates a key point: the way you frame a problem determines which solutions you come up with. By shifting the way you see the problem – that is, by reframing it – you can sometimes find radically better solutions. What might it mean for your team, your organization, your society – or for that matter your family – if you could get better at doing that?

Through my research and work with a wide variety of companies globally, I have developed a simple three-step process for reframing. The process can be outlined as a loop – see Figure 2 – and is repeated throughout the problem-solving journey. A team might start with a round of reframing on Monday, switch into action mode for a week, and then repeat the process on Friday, asking: “Have we learned something new about the problem this week?”

People often fall in love with a solution – we should do x ! – without checking whether they are solving the right problem (or if the problem even exists). To counter that, start by asking a simple but powerful question: “What problem are we trying to solve?”

Ideally, create a written problem statement: “The problem is that…” The statement isn’t meant to be perfect; it’s just raw material for the process that follows. Jot it down quickly, using full sentences (bullet points make reframing harder). Writing down the problem creates a brief, natural thinking break and makes it easier to examine the framing.

Next, spend between 5-10 minutes trying to challenge your initial framing of the problem, ideally with the assistance of at least one or two other people. The process is similar to brainstorming, only instead of looking for solutions, you are looking for new perspectives on the problem itself.

To help with that work, here are five research-based strategies you can apply. Depending on the time available, you might use one, some, or all of these.

1. Look outside the frame

When analyzing a problem, most people dive straight into details: “Why is the elevator slow?” Expert problem-solvers do something different. They try to zoom out before they delve in, asking: “Is the speed of the elevator the right thing to focus on?” To zoom out, think about what’s outside the frame:

As you do this, beware of getting trapped in your own expertise. As American philosopher Abraham Kaplan famously wrote: “Give a small boy a hammer, and he will find that everything he encounters needs pounding.” To avoid that mistake, bring in people from different parts of the business for fresh perspectives.

Sometimes the key to radical breakthroughs is not to analyze the problem, but to ask another question: “Are we pursuing the right goal?”

In the field of negotiations, for instance, experts talk about the difference between ‘positions’ (stated goals) and ‘interests’ (higher-level goals). A prominent example, described in the classic book Getting to Yes, was the historic Camp David Accords between Israel and Egypt in 1978. Both countries wanted full control over the Sinai Peninsula, and every attempt at compromise had been rejected.

The conflict was resolved once the higher-level goals of the countries became clear. Egypt cared about ownership of the land. Israel, in contrast, wanted security: they were worried about having Egyptian tanks parked right across the border. The solution: a demilitarized zone that Egypt owned, but where they couldn’t have armed forces stationed.

Problem-solvers naturally focus on things that go wrong. This bias, however, can lead us to overlook a key source of insights, namely the positive exceptions. Doctors, for instance, have long known the power of asking their patients, “Are there times when you don’t feel as bad?” To find such bright spots – a term coined by authors Chip and Dan Heath – ask:

If you can’t identify any bright spots, try broadcasting the problem to a wider group.

The Dutch company DSM, for instance, had struggled with a difficult R&D problem for two years. Then, some of their people created slides describing the problem and circulated it on social media. A few weeks later, the problem was solved using the combined input of five people – three of whom worked elsewhere in the company.

4. Look in the mirror

Being human, we tend to think that problems are created by other people – also called ‘idiots’ – with us in the role of the innocent victim. That’s a comforting perspective, but it rarely solves problems.

To counter this, take a look in the mirror and ask, “How might I be part of creating this problem?” If your team isn’t collaborating well, for instance, what might be going on with your own leadership style? You might also seek an outside perspective from someone who’s willing to challenge you. One oil and gas executive, John, used the ‘look in the mirror’ strategy to great effect when he managed a factory. When things went wrong, his employees were naturally worried about being blamed, so John made a habit of opening those conversations with an unexpected question: “Tell me how the company failed you.” That led John and his team to make significant improvements to the factory.

When we try to understand others, we too often jump to facile conclusions: “My client is stupid. My co-workers are lazy. People voting for the other side just want to see the world burn.” The antidote is to go beyond such first impressions, even if they feel right. For each stakeholder, ask questions like:

Rosie Yakob of the advertising agency Genius Steals told me about an experience during her time leading the social media practice at Saatchi & Saatchi. A client was repeatedly demanding a YouTube video that would “go viral,” despite the fact that user engagement was a much better success metric. “We were tearing our hair out over this stupid client. She was asking us to do something that just didn’t make sense.” But then Rosie started wondering, was something else going on? To find out, she invited the client out for drinks. After a couple of cocktails, the truth came out: the client’s bonus was based on getting a million views on YouTube. This revelation broke the impasse and allowed them to find a way forward.

Once you’ve reframed your problem through the five strategies, it’s time to swing back into action. Without forward movement, even the smartest people can fall prey to ‘paralysis by analysis’.

The type of action you take is crucial, though. Most people know that you should test your solution before you commit to it. What is less well recognized is that, before that, you should test your problem. This is vital, because testing a solution can create a bad form of momentum. Once you find the perfect name for your new product, it is harder to challenge whether building it is a good idea in the first place.

Testing your problem can be done in different ways. One surprisingly useful method is simply to describe the problem to the stakeholders and see how they react. Another is to run small experiments, lean start-up style. Using outsiders can also be helpful at times – say, if you think frontline employees might hesitate to speak freely in your presence.

One of the companies I studied, namely Cisco, used problem validation to great effect. Cisco’s many talented engineers provided a steady stream of technical breakthroughs – but they were sometimes too quick to launch products before they knew if clients really needed it.

To remedy that, Cisco employee Oseas Ramiréz Assad launched Startup Cisco, an internal service aimed at testing problems rapidly. A key rule: talk to prospective clients very early in the process, before you build anything, but don’t mention your solution. Instead, simply ask if the client actually faced the problem you had in mind, and try to learn more. The approach helped Cisco validate many projects early on. More importantly, it allowed them to drop other projects at little cost, as it became clear that clients didn’t actually have the problem those projects would solve.

For far too long, for lack of this basic thinking skill, we’ve been barking up the wrong trees. The process I described here can change that – and I hope it will. I believe we need to spread the knowledge of reframing far and wide, so we can all stop wasting our powers on the wrong things. We need reframing to be taught in schools, in entry-level jobs, and in the boardroom too. We need, in short, to democratize reframing.

To get started, I suggest you start practicing the method now, on issues big or small, at work or at home. By practicing it on small problems, you’ll get better at using it when it matters most. Share the method with at least one other person in your life, too. Problems grow smaller when you have someone at your side – and that is doubly true if that person happens to understand reframing. We all face more than enough problems. It’s about time we cross ‘solving the wrong problems’ off the list.