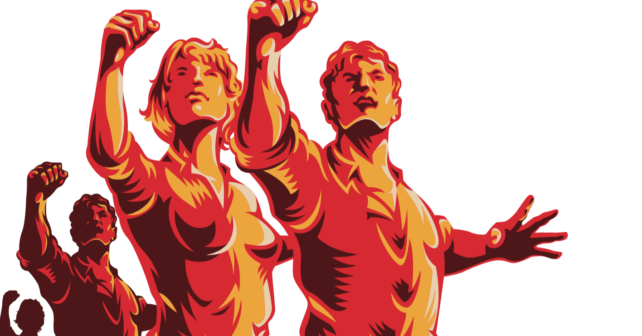 Even conservative businesses can transform with people at the forefront, say Kate Sweetman and Shane Cragun.

“The time has come to defend your life and Ukraine. Your victory depends upon how many people are ready to say ‘No’ to this government, ‘No’ to a total falsification of the elections.”

Exit polls had suggested that the race to be the next president of Ukraine had been won by opposition candidate Viktor Yushchenko, after a campaign in which he had been poisoned and nearly died. But state-controlled media declared the regime’s candidate, Viktor Yanukovych, the winner. When the Ukrainian people realized that even election officials were in on the fraud, they answered the call for action and poured into the streets. For 17 days, in the bitter cold of winter, over a million citizens marched in protest. They formed human barricades around government buildings, paralysing state functions. Restaurants donated food, businesses contributed tents, and ordinary people brought blankets, clothing and money. At night, rock bands energized the protesters. In total, almost 20% of the Ukrainian population took part in the movement to take back their country.

And they won. In December, a new vote was held, which Yushchenko won decisively. He was sworn in as president on 23 January 2005. As Steve York, director of the documentary Orange Revolution, said: “It’s exhilarating to watch what happens when ordinary people, who are normally considered powerless, recognize their own power, and decide to take action.”

It is much harder to launch such movements in business.

Passion most matters at the grassroots level when intention can become action. In the political sphere, we can quickly find examples of inspired movements, from Gandhi to the 2019 Hong Kong protests against proposed extradition legislation. Today’s social media can unleash a movement in seconds.

But businesses are not democracies based on one person, one vote. They do not ride waves of emotion driven by a deeply personal sense of purpose. Even when business attempts to provide a ‘why’ of work – a sense of purpose – the ‘way’ of work mitigates against deep personal connection and passion.

The reason? The essential nature of business, with few exceptions, has long been top-down and controlled. The dynamics typical of business tend to mitigate against radical action. The need for control, risk management, internal politics, and quarterly earnings pressures weight decision-making in favour of incrementalism and greater certainty. These are the enemies of unquenchable passion and limitless drive.

A new way to inspire movements

Two years ago, we set out to answer the question that many have grappled with, but none have fully articulated: what integrated, holistic strategic leadership model can provide concrete guidance in our age of disruption? Our goal was to find answers that defied boundaries and offered the potential for overturning those traditional business dynamics.

Our research included interviews in 40 countries, in 60 industries and in seven kinds of roles: line leadership; HR, talent management and L&D; external recruiting; authors and academics; professional services; disruptors, especially in Silicon Valley and China; and specialties, such as those from religious institutions or mindfulness and meditation experts, who could help us to understand resilience and poise under pressure. Through this research, we have uncovered a five-part strategic leadership framework that can successfully create a movement, a seismic shift in approach and performance, in business.

Morocco-based OCP Group – originally the Office chérifien des phosphates, or Cherifien Office of Phosphates – has become a poster child for our research. We met OCP’s chairman and chief executive, Dr Mostafa Terrab, at an entrepreneurship conference in Essaouira on Morocco’s Atlantic coast in May 2018. We realized that he was an excellent example of the type of leader needed to navigate our times. In fact, what we had been calling a movement, he had also been calling “le mouvement ” in OCP.

OCP is a fertilizer company. It has 21,000 employees, located primarily in four mining sites and two chemical complexes in Morocco, as well as other international locations, with a 2018 turnover of US$5.9 billion. Until 2006, there existed no more bureaucratic an organization. It was founded in 1920 as a government bureau in order to exploit Morocco’s greatest natural economic asset: gigantic phosphate deposits. Phosphorus – along with nitrogen and potassium – is one of three key nutrients for plants, and as the main ingredient in phosphate fertilizer, is vital to food production globally. Morocco holds 70% of the world’s phosphates, with deposits large enough to last the next 400 years, even given the projected growth of the world’s population.

Until 2006, the only activities in OCP were mining, a certain amount of chemical processing, a limited amount of production of its own fertilizer – its runoff highly polluting to waterways – and shipping phosphate around the world. The primary metric was production, and the primary motivation for working there was a job for life.

If your identity is fertilizer, you only see fertilizer

Terrab joined as chairman and chief executive in 2006. With a background in both Moroccan and international organizations, he saw vast untapped potential in OCP, which at the time was deeply in the red. After a couple of years of improving operational efficiencies, Terrab shifted his attention to preparing for what he called “the post-fertilizer world”. He intended to change the business dramatically: to disrupt OCP before it was disrupted by some bioengineering firm designing plants capable of thriving without fertilizer. He took the bold step of breaking the social contract in the organization, retiring the old guard a decade early and bringing in fresh thinking in the form of Millennials, digital natives with the right skills and attitudes.

What became le mouvement arose spontaneously in a town hall meeting in 2016. As Terrab urged 50 early career managers to create a different future by finding innovative solutions to existing problems and inventing new businesses, he was directly challenged. They said: “How can you expect us to find the time, energy or latitude to do that when we are on the hook for KPIs?” Without pause, he responded: “Forget your KPIs. Design the job that you think you should have.”

While his response was spontaneous and delivered under pressure, his follow-through showed total commitment. He realized that those managers were right: the system needed to be blown apart. “The world moves continuously but we change in phases and increments, halted by our mental maps. We need to start with ‘who’. It is not about sense-making. It is about sense-makers.”

In other words, it was all about employees. Within three months, any employee could take on any challenge they saw fit, as long as it was in keeping with the mission of the firm, to “contribute to sustainably feeding a growing world population”, and at least one of three key strategic initiatives: digitalization, a company of learners, and globalization.

Le mouvement took two forms. The first was ‘subsidiarity’, the principle that decisions should be taken at the lowest level possible, by the person or people with the greatest knowledge and passion. This principle applied best to incremental but important improvements to people’s jobs or their environment.

The second form was les situations. This came into play for more complex opportunities, or new initiatives to do something larger. Through this form, employees set up a fully-fledged media organization in place of old-fashioned communications groups, complete with TV programming and a social media presence, and launched a new, inexpensive solar-powered pump aimed at African subsistence farmers.

In both forms, there was an expectation that employees were to act on their own cognizance, engaging peers as advisors where appropriate. The larger, more complicated ‘situations’ ultimately did require senior management approval and buy-in to gain funding. The originating employee would put together a team to develop the idea and help decide if the idea was sound. If the idea reached the point where it needed resources or funding, it was presented to a senior leader for approval. Once resources were in place, the team was back in charge of taking it to the next level.

The key to the ‘situation’ is that, despite senior management involvement, it is completely driven by convinced and passionate employees. There were no KPIs to meet, no ROI to prove, no schedule to hit, and no other sort of control by anyone else.

By June 2018, le mouvement was practised by about half of OCP’s employees, and rising. It has resulted in a large number of improvements. They include the launch of 60 bespoke fertilizers, each designed for different plants and conditions, which nourish plants without releasing polluting runoff. These life-giving elixirs are especially focused on the needs of poor African farmers, whose use of fertilizers has historically been limited by cost and access. They also reflect the embrace by OCP of sustainability, a dramatic concept for a company whose sole product historically polluted land and water.

Other results have included the development of four fertilizer ‘mini-mills’, capable of small production runs and a one-hour turnover of the line, and the launch of four spin-off businesses which were judged to be good for Morocco but not to sit in OCP’s wheelhouse – so are now run independently by former OCP employees.

We defy any leader reading this to have a more difficult challenge than building passion around a product like fertilizer. But if a movement can transform a traditional fertilizer business, think what it could do for your organization. OCP beautifully illustrates what we have rarely seen in other firms. Start by freeing people up mentally, emotionally and organizationally; enable them to learn and develop in ways that fulfil them; and watch them create the inspiration and results you need.

— Kate Sweetman and Shane Cragun are the founding principals and chief client officer/chief executive, respectively, of SweetmanCragun Group. An adapted version of this article appeared on the Dialogue Review website.