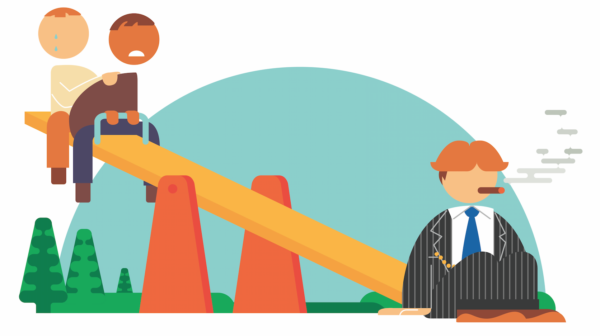 Innovation and developments in the financial industry are shaped by global megatrends in demographics, economics, and resources.

Those in the film industry often say that every movie ever released is ultimately based on one of 36 plot formulas. This holds true whether the film is a gritty indie film, a flashy Bollywood musical, or an action-packed blockbuster. This principle holds true for many of the events and issues that the world is currently facing, from business and economics to migration and climate change. In our recently released book, Understanding How the Future Unfolds: Using DRIVE to Harness the Power of Today’s Megatrends, we investigated some of the foundational megatrends that inform current events and economic forces today, just like those 36 basic stories have influenced movies throughout cinematic history. Of course, the economic, business and social environments are extremely complex, and we would be foolish to claim that we can distill everything in the world down to a few simple forces.

In other words, by being able to involve as much as we can in our analysis, we can come to better decisions; harnessing the power of megatrends can lead to intelligent choices.

We have identified five specific megatrends that can help us make more sense of what is happening around us in the world, and where it is potentially heading.

At the centre of all activities lies people. Many populations around the world are getting older, with healthcare and pension costs expected to increase significantly. Furthermore, people are living longer, which is putting even more pressure on these costs. At the same time, with the size of the younger population shrinking, there are far fewer workers to pay taxes to fund government social payouts – thus exacerbating the issue.

The research for our book has shown that there is little need to be concerned about oil and energy shortages. This is not least because green energy is developing at breakneck speed, compounded by the fact that crude oil prices are likely to remain low in the foreseeable future. More worrying, however, are food and water – more precisely, a shortage of quality food and clean water. While junk- and low-quality food are likely to be linked to various health conditions, a lack of clean water would have significant social implications and tear up the fabric of society.

As a population, we have also demonstrated extreme wastefulness – throwing away everything from food, to plastic bags and containers, to electronics. Together with the rapid depletion of natural resources, these wasteful actions have lately prompted a movement called the circular economy, which focuses on prolonging the lives of, or even reusing, materials and objects.

The fact that there exists a wide gap between the ‘haves’ and the ‘have-nots’ is now well-known. Yet governments have done very little to diffuse this time bomb, which, in the long run, would cause significant damage to our society. Just observe the recent tax cuts in the US, which past research has repeatedly shown to benefit wealthy individuals over the economically underprivileged. At the same time, various other inequalities are also emerging. One of them is age. Many current regulations, such as the rigid employment law in place in many countries, favour the older generations, leading to fewer new positions for the younger ones. And then there is capital inequality: government and financial regulations tend to favour debt over share-financing, leading both individuals and corporates to rely on money that they don’t have.

If the ‘haves’ are gaining more, while the ‘have-nots’ are getting less over time, then what about those in the middle-income group? The answer: since the mid-1980s, this very group has been receiving less, even though the economic pie is, overall, growing bigger; they are going in the direction of the ‘have-nots’. The reason: the arrival of digital technologies that have subsequently eliminated plenty of white-collar jobs. In the very near future, robotics and artificial intelligence are likely going to lead to further job displacements, with greater speed and scale.

Technologies by themselves have little – either positive or negative – impact; it is usually how businesses use them that realizes the true potential of technologies. Just witness the swift emergence of drones. Their real strength is brought out by businesses – stretching from farming and insurance, to retailing.

How DRIVE can inspire the area of finance

Recently, two advertisements have appeared on the London Underground. Both feature the latest products from a major UK high-street bank. The first is a credit card that does not charge extra fees when used abroad; the second offers 20 months of 0% interest on balance transfers. To some Tube passengers, these ideas may be brand new propositions. However, the fact is that both offers are old news and have been around for a long time. But why are banks just doing more of the same, competing solely on price? Can we look at the megatrends identified in the DRIVE framework to come up with novel ideas and find new opportunities? We think the answer is, yes.

Based on this megatrend, two observations can be made. First, in more than a few countries in the world, the population structure looks more like a beehive than a pyramid – there are more people aged 40-55 than there are in other age brackets, with the younger age brackets being particularly sparsely filled. Second, given the fact that people are living for longer and longer, many population pyramids are now coming to resemble The Shard, the iconic building in southeast London with a narrow base that stretches high up. Both points have massive economic implications – and opportunities – at least in terms of healthcare, investments and pensions. For instance, as it becomes more and more burdensome for governments to fund healthcare for elderly populations, a greater variety of insurance products will be demanded to add increased protection. If we continue to live longer, we will need new pension products. Furthermore, if 60 is the new 40, then our investment portfolios should change accordingly to reflect the longer-term thinking in terms of returns.

Investing in critical resources will likely bring higher returns. For instance, last year the Slovenian government passed a law forbidding private companies from buying the country’s bodies of clean water. As such, new technologies like water purifiers or air-to-water converters may become good investment opportunities. Moreover, it is very probable that investment opportunities will be found in businesses that seek to better use resources. For instance, we may see that companies that buy into the circular economy can, in the long run, generate higher returns.

Major banks are far more interested in people who have money than those who do not. A consequence of this is that many of them end up competing over the same set of customers, leaving a massive group of potential customers unserved. Hence why new business systems are on the rise, such as M-Pesa which has risen to be a major force in Africa, gaining a huge number of customers who previously had no means of engaging in financial transactions.

This is not only applicable to developing countries. The inequality dimension also helps businesses find new opportunities in developed countries. France’s Compte-Nickel, for example, serves those who were previously ‘unbanked’ and ‘underbanked’. In one of our training workshops, we came across a start-up that was developing medication to help drug addicts rid themselves of their dependence. One question posed to us was this: which country would be the best market in which to target their products? From our research, we found that wealth inequality is directly related to social illness, including drug addiction. In this case, our advice was simple: look for the country that is the most unequal in terms of wealth distribution.

In this age of acceleration, it is difficult to see how many of the traditional financial theories are still applicable. For example, conventional ideas like portfolio theory (which assumes that risk follows a statistical pattern when it does not) and the capital asset pricing model (which assumes the government would never default) are becoming less and less relevant in a world that is changing at such a rapid pace.

With mid-level, full-time jobs gradually becoming a thing of the past, what kind of new financial services will be needed? With the rise of the gig economy, what new services would people need from mortgages to be able to receive and make payments? Any company that can address these issues well will probably succeed in tomorrow’s financial services sector.

As mentioned above, it is business that brings out the best from new technologies. The so-called ‘FinTech’ (financial technology) industry offers some excellent examples.

Take Curve, for instance: it is based on a simple yet very useful premise – putting all your cards on to just one. Users can scroll through their different bank accounts and link them to the physical card through the company’s mobile app.

Another FinTech startup, Revolut, enables users to convert their money into different currencies on their mobile phones at a rate that is close to the market spot rate. Contrast this to the traditional alternative offered by high-street banks, which often involves filling in long forms and having to accept unfavourable exchange rates, not to mention the hefty commissions on top.

The power in you

The power of understanding megatrends lies in analysing a product, a service and a business from different perspectives. By looking at how the future could unfold, we stand a better chance of being rising stars and avoiding slow-motion train-wrecks. By paying closer attention to this framework, individuals, companies and governments will have a better understanding of what is in store for them, and will be able to take advantage of change and see greater impact coming from their decisions.

— Dr Terence Tse is associate professor of finance at the London campus of ESCP Europe Business School and an educator in Duke CE’s global educator network.. Mark Esposito is a member of the teaching faculty at Harvard University’s Division of Continuing Education, and holds the role of professor of business and economics at Hult International Business School.