Focus on the target, or focus on your shooting? Most learner archers opt for the first option, and fail. “There is a saying in kyudo that the right shooting always results in a hit,” says Jerome Chouchan, president of luxury chocolatier Godiva in Japan, South Korea, Southeast Asia, India, Australia and New Zealand. “When you are in the archery hall, what you learn is that if your mind is taken by the target, the outcome, then your posture isn’t straight, your mind doesn’t flow, the energy doesn’t flow properly in your body, you become tense and – finally – you miss.”

The problem, he says, is that by focusing on the target, your mind naturally turns to the space between your arrow and its goal.

“The target is 28 metres away!” says Chouchan. “If you concentrate on where you are now, you will hit your target, which is at a distance. But if you are thinking about the distance, you will not perform properly – and you will not hit.”

The teachings of kyudo translate emphatically into the business arena, says Chouchan. “If you focus on the needs of the consumer, then the financial pressure of your sales targets are away from your mind. So you do a much better job and, finally, you hit them.” At Godiva, Chouchan has drawn on his learnings to refocus the organization on four key areas, all of which are designed to reduce the ‘distance’ between the business and the consumer: better products (making the goods on offer of the highest quality); better stores (finding the best locations and creating the most beautiful displays); better communication (advancing the most powerful advertising and marketing); better skills (better selling and welcoming from Godiva store staff). “We are very demanding of these four elements – relentless,” he says.

The strategy has proved an unqualified success. In five years, Chouchan has doubled the size of the business, he says. Precisely by not focusing on his target (he was handed a goal of 2-3% growth a year), he has overseen growth of 15% annually. 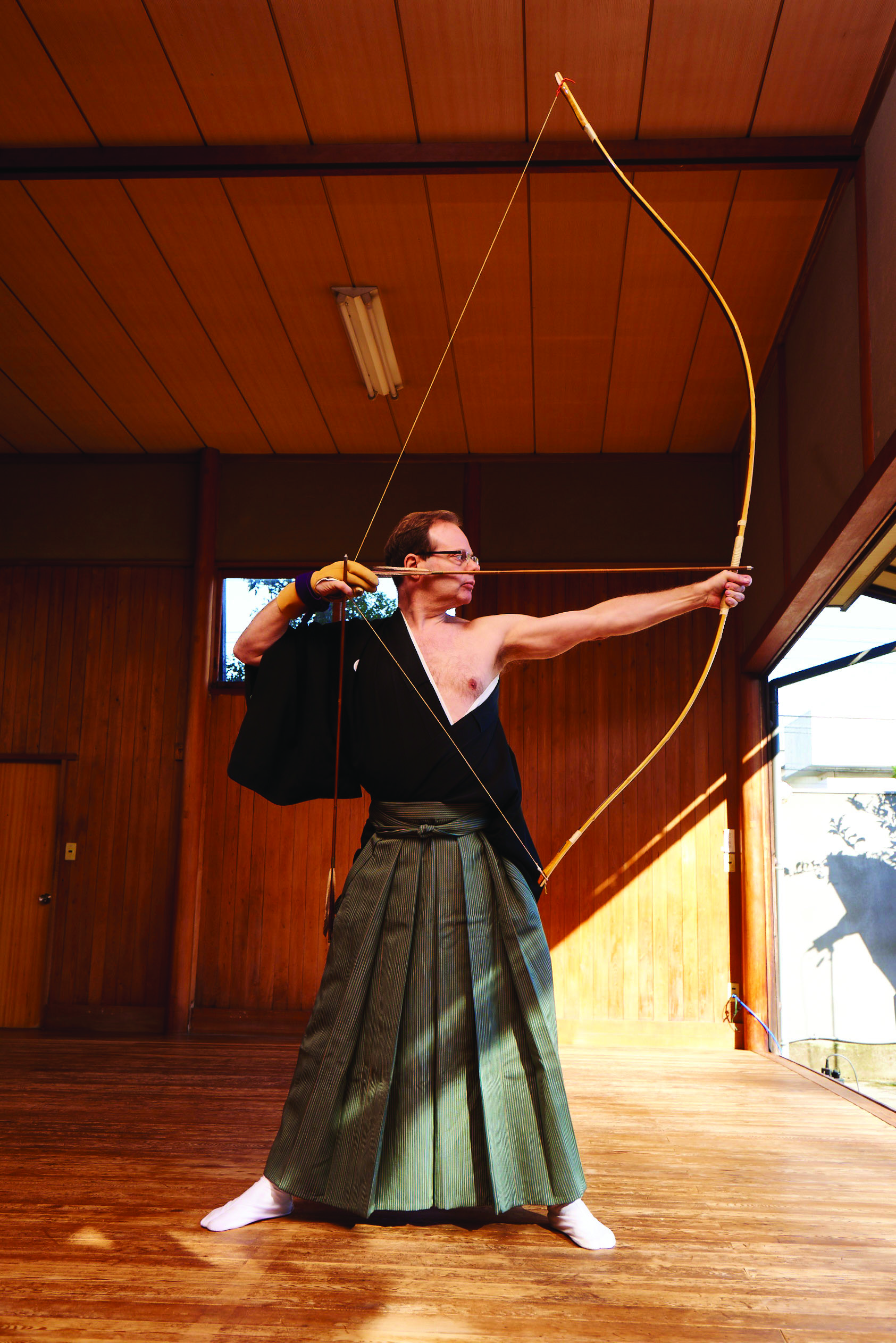 “In kyudo you aim for a state of ‘non-duality’,” says Chouchan. “You become at one with the target. And at that moment you release – and you hit. In business if you become like the consumer, you suddenly get good ideas and better products. There is no longer this distance – ‘I am here with a product I should push to you’ – instead I myself become the person who will buy my products. There is a state of unity. The distance between the company and the consumer becomes less and less, and that is where the hit happens.”

Reducing this distance, focusing on your form in business rather than the target, becomes ever more critical the higher you climb the corporate ladder, says Chouchan. “Those distances become longer,” he tells Dialogue. “You talk to internal stakeholders, to your bosses, you become pulled by internal politics. There are many forces that prevent you from reconnecting, and you lose touch. You have to fight against that, and again become the consumer yourself.”

It was in a former role, when reaching the top of ceramics manufacturer Lladro, that Chouchan first began to blend his kyudo with his business practice. “The two began to merge when I first became a president,” he recalls. “Once you become a president, you have a budget to achieve which is completely on your shoulders. The process of looking at my yearly target and my archery target merged naturally. I discovered that I am the type of person that worries easily. I found out that, in my archery practice, I was thinking: ‘Will I hit? Will I shoot properly? Shall I release the arrow now to hit?’

“Yet I found that when I learned to focus on the right shooting, and not the target, that is how you will hit the best. I applied this in my business. Rather than be worried about the numbers, or pushing my team to make the numbers, I instead began to ask them: what is the right action, product, advertising campaign – and what will these bring to the consumer? This changed how I managed my teams.”

The idea that monthly, quarterly and annual targets will look after themselves if companies focus on the consumer experience, rather than the numbers, should resonate with many Dialogue readers. Driving companies for purpose, for betterment of product and service, reaches directly to the core of cutting-edge business thinking. “The financial result is the reward – you did good shooting, you hit; you did a good business plan, you get the numbers – but it is not the purpose,” says Chouchan. “In kyudo the purpose is to build your character – not to hit a paper target. For example, at Godiva our purpose is to bring moments of happiness to our consumer. As a result, we get the numbers. But the numbers are not our purpose. You can look at business as a way of perfecting your character, of learning about yourself, and growing.”

Chouchan, a Frenchman who lives and works in Japan, says the  concept of self-improvement, of self-mastery, is quintessentially Japanese. “In this culture, people have been brought up on the importance of doing your job as well as you can. You could be a taxi driver, or someone who checks passports at immigration, just do it in a quest to be as perfect as you can, no matter what the outcome. There is a focus on the way things are done – that if you do the right thing, the results will come back to you. People will respect someone who cares about what we call ‘the proper form’. The proper form is as important as the result, which is why, in Japanese archery, you could hit the target, but if your form is bad you will not get the point. You will not pass the test.”

Godiva’s amazing success under Chouchan comes precisely because form has taken precedence over the corporate targets, he says. “Some companies might give their people targets of 120 and think: ‘Maybe I will get 110 as a result.’ Here, it is the opposite. We give very reasonable targets and concentrate on our form. We completely over-deliver and grow 15%, then another 15%. That’s where the mindset – the form – takes precedence over the corporate target.”

This enlightened approach to business is perhaps partly a product of Chouchan’s youth, when he visited Japan to pursue an interest in Zen Buddhism. Around that time, there was a writing competition in a French magazine under which entrants were invited to propose a topic about Japan, and the winning proposal would be adopted as an investigative project. “I’d picked up – and found surprising – that some big companies, like Japan Airlines and Panasonic, were sending their new employees away to a temple of Zen to train them, and my chosen topic was: why were they doing that?” he recalls. “I happened to win the contest, so I was invited back to Japan to study this link between these new graduates studying in the temples of Zen. That created the moment for me to go back to Japan and work there.”

Most striking, perhaps, is how his worldview – the Zen, the right-shooting, the form – shapes his whole life. Kyudo is not so much a technique he has learned, but a ‘way’, a prism by which Chouchan approaches everything he does. Many companies try to focus on innovation, on the outcomes of ideation, trying to manufacture solutions to future challenges. But Chouchan considers this a mistake – you can create the environment for ingenuity, but you can’t force its arrival, he insists. “In kyudo we call it natural release,” he says. “It is not something you can plan or control and say: ‘Now is the time for me to release the shot’ – you grow, you grow and then it happens. This reminds me of innovation. Innovation is a process where a moment of serendipity occurs. The natural release cannot be controlled, you can only control the moment up to release. And when I look at innovation or best-selling products that we could make, yes, there is a rigorous process where we talk to consumers. But there is a moment of serendipity, that happens when the proper form is enacted. The natural release cannot be planned or controlled: you do your best up to the moment of something happening.”

With good form, with good practice, with good preparation we prepare ourselves and our companies so the moments of uncontrolled genius can present themselves. You can’t force the genius, the innovation, the ideas, you simply – by good form – allow those ideas to come. “Exactly, exactly!” says Chouchan. “You don’t reach a target if you are obsessed to get it. But if you do your best with the proper form, then the target reaches you.”