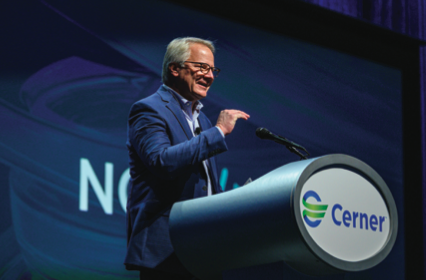 Necessity is the mother of adoption. When the coronavirus pandemic hit the world like a hammer blow, Cerner chief executive Brent Shafer had to convert his $6 billion global healthcare information technology company to remote working almost overnight. “We are a mission-critical system for healthcare providers,” he says, “and we had to ensure we could function as a company, keeping our associates safe, while making sure the data was available for providers, and that we could manage demand for it.”

Shafer and his colleagues reorganized the business – 27,000 employees across 30 global offices – at warp speed. In just four days, the entire company was converted to a Covid-proof, virtual workspace. Rapid-response teams were mobilized as Cerner worked with its partners to expedite surge planning across coronavirus hotspots and set up field hospitals with major clients, such as UK state-run provider the NHS. Just before our interview, Cerner announced that it would be providing the electronic health records platform in London’s Nightingale Hospital, a temporary facility carved from an exhibition hall. “When there was that much demand for our systems,” says Shafer, “we had to make sure we could provide a stable operating environment, and because our partners are under financial pressure, we resolved to act quickly and help them without getting caught up in questions.”

This rejection of smaller or less urgent concerns in favor of big, important matters cut through the entire company. “Having a galvanizing event like this meant debates about minor things just stopped,” says Shafer. “We are a mission-driven company – people are here for all sorts of reasons – technical people, clinical people – but everybody is committed to the mission. There’s been this really strong rally to do whatever we can do to be able to serve, keep our clients up and running and delivering healthcare. As you go through a crisis operation, it’s different from day-to-day operations. Folks know they are empowered to act, and act quickly. People are clearly prioritized on getting the big things right.”

Covid-19 has been a tremendous call to arms for Cerner’s 2,000-strong contingent of medics. It employs more than 800 qualified nurses, approximately 200 doctors and 223 pharmacists. Many of its clinical staff asked to volunteer in the ‘war effort’ against the virus, striding into high-risk environments to serve the public. “That’s a great example of the culture here,” says Shafer. “Our people are going back into nursing in virus hotspots to help local providers.”

A sense of purpose was there every day before the outbreak, Shafer says, but has been magnified and amplified as coronavirus took hold. “It’s a unifier,” he says. “Even though our typical employees are sitting at home by themselves in front of a computer, they feel very connected with what we are doing.”

Cerner’s high-engagement, virtual workspace is a microcosm of its services. The future of healthcare is digital. Consultation and diagnosis need not always be done in person. Yet, Shafer reveals, much of insurers’ compliance processes have in the past militated against virtual healthcare’s widespread acceptance. Again, necessity has been the mother of adoption. “From an innovation and technological perspective, telehealth has been possible for a while,” says Shafer. “And we’ve been driving that and getting that in place. But a lot of the rules for care providers on how telehealth can be used and is allowed to be used – reimbursement rules, insurance rules – have prevented more widespread adoption of those technologies.

“The care providers have to comply with the rules from a regulatory perspective, but also to be paid. The insurers have certain criteria. And most of those rules don’t have much to do with the technology, they have to do with what the payer considers a sufficient level of exchange with a patient to warrant payment. But what you get now is a waiving of those rules – they have been brushed aside by the urgency of the situation.”

There has been an explosion of telehealth at Cerner. The company has clients that are seeing 100-fold increases in telehealth virtual ‘visits.’ One client told Cerner that it went from a few per week to nearly 2,000 in the five days prior to Dialogue’s interview in April. “There’s been a very rapid adoption of technology by payers because they are just trying to serve so many patients in such a concentrated period of time,” says Shafer. “And they can use telehealth rather than have people engaging physically in an office environment. It’s exactly what we need right now.”

Shafer believes that the accelerated acceptance of telehealth will continue, and that the shift triggered by the pandemic is likely to endure. “It’s not like this will go away after 90 days and everything will go back to the way it was,” he says. “That’s not the case at all. These will be long-lasting changes. They will change how we see a doctor. We’ve got a year, maybe two years, of working through this.”

Telehealth’s time has come. Virus phase two, when humans are allowed back into the wild, will demand technologies that can be rolled out at scale and speed. As lockdowns slowly ease, community testing and tracking will become the new global challenge. “As we all think about going back, which is on everyone’s mind, testing and knowing that immunity is there is fundamental,” says Shafer. “That is a whole riddle that has to be solved. How do we screen and test this massive world population and then keep a record of who has been tested and at what level, who is immune and who has been exposed to the virus? This has not been solved yet, but when it is, it will be a big leap.”

Early in his career, Shafer made a leap of his own. In grad school he took a job in public relations – “if you can believe that!” – but the role was in a children’s hospital. He rapidly became attached to the sector. “It was such a motivating environment,” he says. “I felt like I wanted to be part of this in some way.” This early career experience sowed the seeds for his subsequent move into healthcare leadership.

But it was a later family ordeal which caused his connection to grow even stronger. His twins were born very prematurely and spent the first nine weeks of their lives in intensive care. “Those days left a pretty heavy impression on me,” he says. His success in reaching the very pinnacle of the healthcare sector is, he reflects, driven by the mission. “I’ve always tried to work with companies that have the mission right and are trying to make a difference and improve healthcare. Cerner has a very clear mission to do that, and we are in a great place to help, with the technology and innovation we can bring. And how that technology is utilized – we make a difference there too.”

Seeking out companies and colleagues with a similarly strong sense of purpose is, he says, core to success. “The approach I’ve taken throughout my career is to try to build very strong teams and cultures that are based on trust,” he says. Friends and colleagues note his consensual style. Cerner’s culture is one of operational excellence coupled with a collegiate way of working. “If you get good people around you that have shared values and know their jobs and skills, and you all have a shared sense for the mission and what you want to accomplish, it tends to make things go well,” says Shafer.

Shafer’s father had a small business, which the younger Shafer worked in from the age of ten. “My father had some golden rules,” he says. “One of them was that if you are going to ask someone to do something, especially if it’s difficult, you’d better be prepared to roll your sleeves up and do it yourself, or do it with them. That’s kind of stuck, and through my career I have tried to apply that to the way I work with teams.”

He believes in choosing the trickier path. “Find something that you believe in and work towards that,” he says, “Do work that’s worth doing with people that you enjoy being around, because you end up spending an awful lot of time with those people. And as you get more into your career and opportunities come to you, take the job that nobody else wants. It may sound illogical, and people look at the jobs and think ‘that sounds hard’ or ‘I’d rather take the one that is more well-known.’ But, in my experience, in the harder jobs, where you have to turn everything around or create something that doesn’t exist – you learn so much from those experiences.”

The coronavirus pandemic has left the world in acute need of innovators that are prepared to step into the fog of war and emerge with clarity. Shafer has the mindset for the challenge.

“You are unlikely to learn just by tweaking the dials on something that someone did before you,” he says. “I think those are great leadership opportunities: take the hard win and fix the problem. Or take a problem where it’s not clear what the path is – and create a path.”

— Ben Walker is editor-at-large of Dialogue.