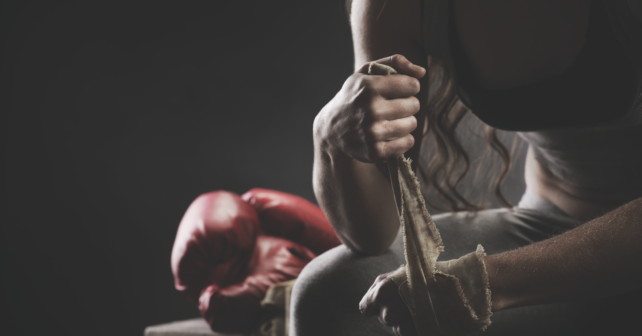 We all know the stereotypes of male courage under pressure, and yet research shows women are actually better equipped to perform well in intense business situations.

A recent study in Harvard Business Review told of raw gender discrimination at work. Using a large multinational with a statistically typical male-biased hierarchy, the researchers collected emails and diary entries from hundreds of employees over a four-month period. They also gave 100 staff sociometric badges to track their inter-personal office interactions. These badges were designed to reveal who talked to whom, where conversations took place, and who dominated them. The team assumed that the data would show that women are undermined by their own behaviour at work: failing to network with the right people, to hang out with senior people, or to focus on the right things.

But the data showed no difference in the behaviour of men and women. Women had the same number of contacts, spent as much time with senior leaders, and used their work time in a similar way to their male peers. Even appraisal data showed statistically identical scores for performance between men and women. The researchers were forced to conclude that “gender inequality is due to bias, not differences in behaviour” (HBR, 2017).

How can female leaders fight the perception that they’re less worthy of promotion than their male peers, when there is no basis for it in fact? For many years, professional women have tried to change perceptions by dialling up their ‘blue-stocking’ credentials. It’s no secret that some women wear spectacles to interviews or big meetings. Wearing glasses has been shown to make you appear more intelligent to others. What you might not have noticed is that women also credentialize more in their email signatures and business cards. A recent study commissioned by BP (Spot the Difference, 2018) reported that women are more likely to use professional accreditations to underscore their status and authority, and to build credibility and confidence.

Indeed, confidence remains a major problem for women at work. A 2011 study by the Institute of Leadership and Management (ILM) found that 70% of male managers have high levels of self-confidence, compared to only half the women. Half of women admit to feelings of self-doubt at work, compared to less than a third of men. These confidence levels affect ambition too: the study found that individuals with high personal confidence were more likely to expect to take on a leadership role than those without.

However, what is so very devastating about the HBR bias study is that it suggests women’s efforts to project credibility and confidence are currently in vain. Even if we felt more confident, or acted that way, we would be discriminated against.

How then might we fight this naked bias against us? One key insight is provided by the data on bias, which reveals another aspect of men’s advantages. In law, solicitors – including female ones – are more likely to instruct male counsel, seemingly because of a perception that men fight harder in the courtroom. In medicine, male surgeons are preferred because of a perception that they are more reliable. And the UK’s Hampton-Alexander Review of boardroom diversity found that some FTSE 350 chairs and chief executives thought that women would not want the hassle or pressure of sitting on a board, and would struggle with the complexity of the issues involved.

This is clearly nonsense. It is to some degree symptomatic of the paucity of women in the data. But it also shows that at the moment, perception is trumping reality. We still see masculine behavioural traits as giving men an edge at work. Until women can evidence concrete experience of the macho side of leading, it seems they will be deemed a riskier hire than an apparently tried-and-tested male counterpart.

One response therefore could be for women to redouble their efforts to ‘man up’. In fact, research suggests a different approach could pay dividends.

If a leader encounters a new and stressful situation, their brain has to devote all its capacity to solving the problem. This is precisely the reason that, for years, the military has used the concept of standard operating procedures. Knowing that personnel in combat situations will be under extreme pressure, their training attempts to code in as habits those routine activities that need to feel utterly instinctive in any situation, like checking equipment or loading a gun. These habits are stored as shortcuts – or heuristics – in the brain, so that they take up less processing capacity when they are executed on autopilot, leaving spare cognitive capacity to cope with new and unfamiliar situations. In the same way, if a leader can learn the basic practices of leading, they become automatic, freeing up valuable neurobiological resource for the unexpected. If these basics are stored emotionally as well as cognitively, they also remain available under pressure, hugely reducing the risk of the selection of an incorrect emotional response by way of an amygdala hijack.

In one piece of work at Ashridge, we made an effort to demystify the outdated model of ‘leader as hero’. We asked board-level leaders what they now know about themselves as leaders that they wish they’d known ten years earlier. We hoped that this ‘20:20 hindsight’ might be reversible into the kind of ‘20:20 foresight’ that can be taught to others. Talking to leaders from varied sectors, we identified 17 critical incidents which constitute the most common crucibles of senior leadership. They were a meeting, a moment, a headline or a failure that had forged their leadership, and which in hindsight our interviewees wished they’d been able to pull off with more poise and ease (see the Seventeen Critical Incidents, below). 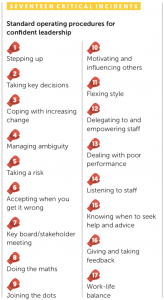 In itself, the list is completely unremarkable. What is remarkable is how these lessons were acquired. All were learned through experience, and through bitter experience at that. Wouldn’t it be far better if we could learn these templates as standard operating procedures and build the muscle-memory for leadership in a less exposing way, without waiting to be mugged by fate?

To do this, we built the critical incidents into a simulation. It worked phenomenally well. Using psychometrics, questionnaires, heart-monitors, video-recording and observational data, we discovered that the simulation both accelerated learning and extended its shelf-life, by embedding it deep in the emotional memory. Participants learned faster, and acquired memories that last. Increased heart-rate during the simulation was correlated with higher levels of learning, which remained high throughout the period of post-programme testing. We also found that the learning was largely independent of any demographic or psychometric variation between participants, and – crucially – did not vary by gender.

At board level, there is nothing more compelling at interview than a safe pair of hands. If you could evidence the fact that you had already triumphed in all 17 of the critical incidents, with detailed and pressured examples, who could match you?

Women are a better bet under pressure

The biology is simple and widely understood. In dangerous situations, the body moves into ‘fight-or-flight’ mode, producing adrenaline to boost performance in what is perceived as a zero-sum game.

What is less well understood is that this response is not a universal one. It is a male one. The fight-or-flight theory was originally based on studies on male rats. Study moved to humans, yet before 1995, women made up just 17% of test subjects in the field. Results from women were discounted because variations in female reproductive cycles meant that their data was often confusing or difficult to interpret. In the late 1990s, researchers from the University of California became curious about why the data from females didn’t fit. When the tests were re-run, it became apparent that the fight-or-flight theory was predicated on the existence of testosterone. When women were involved, the stress response instead triggered the release of oxytocin, the ‘love hormone’ associated with peer bonding, affiliation and motherhood.

The subsequent paper, published in the Psychological Review in 2000, dubbed this the ‘tend-and-befriend’ response. Only men are conditioned to react to stressful situations by reading them as zero-sum games to be met head-on as a matter of life and death. This is usually explained as a difference in roles from our cave-dwelling days, when men were responsible for hunting and defence, and women for tending the fires and the children. In these conditions, fight or flight would give cavemen an edge. Similarly, for women, tend-and-befriend behaviours would enhance their chances of success in carrying out their roles under pressure. A protective response towards offspring, and building social networks for mutual support and protection, would help to keep everyone safe.

The implications for business could be profound. They’re reinforced by parallel insights from game theory, which also provide a strong business case for preferring women in stressful roles. In game theory, mathematics attaches a positive value to cooperation, because cooperation reduces risk by allowing the parties involved to test each other out and learn about each other. The information this provides expands the set of possible outcomes, generating more solutions to any problems that arise. In game theory, automatic competition is only ever the best strategy if the interaction is a one-off and the parties will never see each other again, which is rarely the case in business.

Such arguments are not new. But they are not being heard. We have a long way to go to eradicate bias. But we need to keep proving women’s value by winning more leadership roles and triumphing in them. When the next C-suiter retires to the golf course, we need to be ready to ace that interview. We can do it if we start preparing now.

That doesn’t mean having to man up: instead, think about a process of ‘leadersmithing’ that forges your capabilities. It’s about acquiring the data points and muscle-memory to prove you can do the job. How many of those 17 critical incidents are already standard operating procedure for you? Which ones might hold you back? When the moment comes, you need to be ready. It’s time to start scheduling some serious practice.

— Dr Eve Poole writes about leadership and previously worked at Deloitte and Ashridge Business School. An adapted version of this article appeared on the Dialogue Review website.