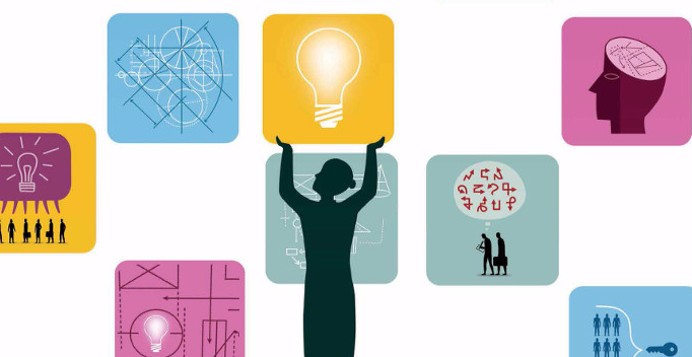 The most exciting innovation in the banking sector is coming from emerging economies, especially in Africa. Here’s what African banks understand about innovation that everyone else doesn’t.

Invention is the creation of something new. For the most part, technological invention represents something we could not do in the past, or something we used to do which has become too expensive due to labour costs. But innovation is not invention. And technology isn’t innovation either. If we buy more technology, do we automatically gain market differentiation and economies of scale? If this were true, two companies equipped with the same technological capabilities would provide the exact same level of performance.

Innovation surrounds how you apply technology to enhance your value proposition to customers. Investors equate innovation with long-term capital appreciation. Some employees equate it with extra work. Others cannot wait to get their hands on the latest gadget or system. Language surrounding innovation has become as complex and charged as the underlying layers of interconnected, intermixed and interoperated technology it represents.

You might say that while the language is tangled, the concepts are simple. Technological  invention is no more about innovation than the invention of the light bulb was about propelling humankind into the 20th century. To understand how to accelerate innovation, we must look at the gaps between inventing and applying, implementing and executing. Only then can we say technology has led to true innovation.

From banking invention to innovation

In 1936, banks invented “the Incassomat” or “robot cashier”, a machine to facilitate deposit making and withdrawals, to improve record keeping and reduce human errors in transactions. Soon, banks piloting it realized the cost of operating it was too high compared with the benefits of error correction.

The next generation of automated teller machines (ATMs) debuted in the 1960s, to reduce operating costs by eliminating bank tellers. ATMs were available during banking hours, but required buttons and pin codes, which, to computer-illiterate customers, seemed like a barrier between them and other humans.

Finally, in the 1990s, banks realized ATMs could represent the bank’s services outside of normal hours and beyond the confines of the branch; customers had become familiar with computer technology and wanted convenience.

The ATM invention became an innovation when the focus shifted from achieving cost-savings for banks to providing added value for customers; it subsequently changed the nature of banking.

For senior executives, technological innovation should advance top-line growth, improve bottom-line performance or significantly alter the quality of customer service. If it does none of these in a timely way, the technology is probably adding more cost than value. Innovation is a process capable of developing the right formula for value creation using technological capabilities in conjunction with human beings.

When companies fail it’s because they have misunderstood how to apply technological solutions to their customer’s value proposition. For example, in banking, it is assumed that everyone wants online banking. But do all customers want the same online banking? Is the value proposition for wealthy customers the same for the middle class or working poor? Does implementation of online banking merely replicate  what we used to do manually at a branch? Is this type of implementation really innovation – or simply automation?

Business transformation through technological innovation should question the premise of what is being delivered to customers. In online banking, innovation is not facilitating banking transactions but making banking invisible, a mechanism to make banking a utility. To use online banking innovatively is to remove customers from individual transactions and provide them with tools to understand their cash flow in the context of long-term goals and objectives. Customers run their budgets serviced by their banks informing them of unanticipated events, enabling them to run their finances by managing exceptions against their plans.

Instead of seeing technology-driven innovation as a new business model or opportunity, it is often seen as a disruption to the normal course of business. Managers lament it. “It’s another IT project in a series of projects that may or may not ever reach full implementation,” they often say. “It is interrupting my business.”

But implementing technological solutions is the new business. Few businesses today can survive without offering customers access to their products and services via technological channels.

Innovation is a new business process

If innovation is a business process in its own right, we need to ask who is managing it across the functional silos of the organization. Studies in the 20th century reported that up to 90% of all strategies – most technology-driven – failed to reach implementation (see infographic, page 33). Studies in the 21st century indicate that our ability to implement has improved; now we only fail 80% of the time! Organizations tend to kill innovation through failing to integrate new solutions to legacy systems and existing management structures. This is why non-traditional start-up competitors (often in non-developed markets) are more agile at moving into a market quickly  to attract a large number of customers. A lack of infrastructure, absence of legacy systems and a common theme of necessity as the mother of invention are driving emerging market innovation.

The Southern African banking market is a hotbed of innovation. Banks have radically altered their implementation process and, in a highly competitive market, demonstrate their technological prowess as they innovate along seven key themes:

Banks in Sub-Saharan Africa realize the mantra is: “reform the bank or die”. The market is witnessing a quantum change due to new competition, new regulations and tech-savvy customers. Banks cannot afford to lag behind.

New market entrants focus on technology-led specialized financial services, such as lending to small businesses or to the working poor. Since lending operations do not receive customer deposits, they do not need deposit protection or full banking licences. They do not carry the same reporting requirements, overheads and customer service representation as their big-bank counterparts. This new competitive phenomenon can be seen across the banks’ product portfolio. Larger banks in Africa are suffering from death by a thousand cuts, as competition slowly erodes their value proposition to customers.

What is different about the approach to banking innovation in Africa is a redefinition of the very meaning of “innovation”. The senior team in one of the major banks in South Africa has hit upon the right idea: make innovation everyone’s job. It has moved away from innovation originating from a special team or the technology group, creating instead a process that makes everyone responsible and answerable. To compete, banks must focus on a process of rapidly implementing innovations, rather than on technologies as an end in themselves. This is working by reducing the roadblocks created by bureaucracy, facilitating organizational change, orchestrating integration with existing systems, creating the right incentives and, above all, motivating people to make it happen. They are creating a business process managed by senior executives to shepherd innovation from idea to implementation. Banks in Africa have discovered that continual innovation is their business; they just happen to be in the banking industry.

It’s easier from the periphery

During the past five years, innovation in businesses and governments in emerging markets has accelerated to a rate that has surpassed their counterparts in so-called developed nations. This is due to three key factors. First, in the aftermath of the global financial crisis, organizations in industrialized nations reduced purchases of technology, thus falling behind. Emerging nations with little or no technological infrastructure could “leapfrog” ahead because they did not have to incorporate large investments in legacy systems. And they experienced higher acceptance of innovations ushered in by a highly technologically savvy young population (in much of Africa more than half the population is younger than 25).

In 2014, bankers in 16 African nations were asked to identify their greatest hurdles to innovation in their markets (see infographic, page 29). A lack of risk taking by senior managers topped the chart, as senior managers identified the high cost of career suicide when projects fail. This sentiment is amplified against the backdrop of a major banking crisis, regulatory reforms and economic instability. Yet by being ingenious, and devoid of laggard legacy systems, African bankers have been able to lead the way in an effort to innovate.

Innovation in African banking was never about buying the latest technology. Rather, as African bankers have discovered, innovation is about  taking risks and applying technologies in new ways. A lack of risk taking acts as a dampener when it comes to capitalizing on innovation. Across Africa, bankers have seen electronic payments, eMoney, peer-to-peer lending and other technologically-based solutions flourish with banks participating after non-banks have made significant inroads into their markets. Simple innovation, such as making all your credit and debit cards inactive and turning them on and off via SMS messaging to the bank, is becoming commonplace. These effectively outsource fraud management to customers, reducing costs while giving the customer control of their bank access.

African banks are taking a more determined role in advancing the technological capabilities of their institutions by a controlled series of innovation projects designed to add value using technology in new ways. Innovation here requires rethinking the value proposition, business processes and overall approach to serving their customers. Rethinking is defined as taking a controlled set of risks through active experimentation.

Financial institutions in emerging markets are also developing products that cater to small groups of people or a single market segment for a specific length of time (micro-campaigns); for example, offering a credit card for young people in the high-tech sector for three to four months. By setting key performance indicators (KPIs) for the product (uptake, volume, return on investment), implementation can be assessed frequently. If the product is not performing, they can kill it and offer customers a migration path to another product. This is known as “fail fast”.

In the past, organizations launched new products every seven to eight weeks and hoped for the best. Performance was secondary; they were copying competitors by launching products. Now,micro-products with micro-campaigns go from idea to launch in five working days and are evaluated daily against KPIs during the 90-day trial period. This process innovation, combined with product innovation, has altered the bank’s behaviour and understanding of, and appetite for, risk.

The fail rate can be as high as 70%, but products that resonate with the market consistently outperform KPIs by up to 1,000%. Creating the right motivation and incentives to reward failure provides the environment for success. 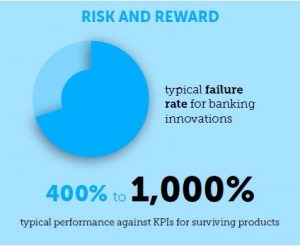 How to build an innovative team

How do senior teams “infect” the organization with an understanding that innovation is everyone’s job? Here is what should be on their agenda:

Organizations often embrace innovation during good times when profits are rising. It feels risky and counter-intuitive, yet during downturns, organizations must continue to innovate to meet customer needs. This is not simply about spending on technology, but seizing the opportunity to rethink business processes, re evaluate the customer base and re-qualify suppliers. One lesson from emerging markets is that necessity breeds innovation, but also requires a new way of thinking.

Innovation is a business process in its own right within organizations, and is everyone’s job. The process must be defined and requires commitment from management, which creates the environment, motivation and inspiration to ignite the spirit of innovation.