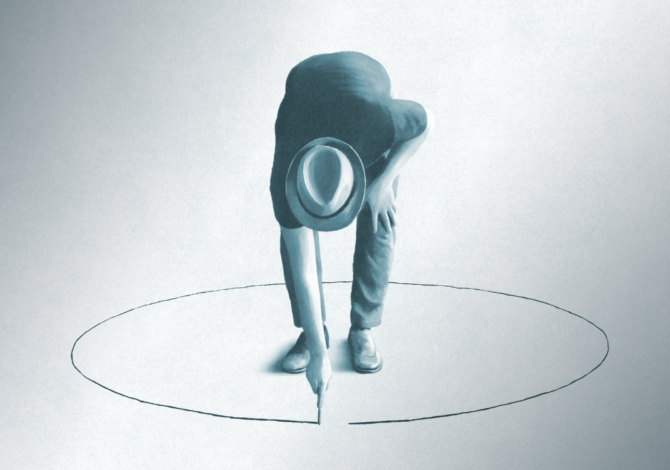 Loneliness is an invisible threat to today’s workforce. Leaders need to create a stronger sense of belonging.

Your team faces an invisible threat. It makes them seven times less likely to be engaged, five times more likely to miss work due to stress or illness, and twice as likely to think about quitting. It is silently and secretly undermining your team’s wellbeing and crippling its performance. This invisible threat? Loneliness.

Remote work, advancing technology, and an always-on work culture are fracturing our relationships, resulting in deep disconnection and loneliness. A colossal 72% of global workers feel lonely at least monthly; 55%, at least weekly, according to research among over 2,000 global workers in my book, Connectable: How Leaders Can Move Teams From Isolated to All In.

In the United States alone, over 15 million full-time workers say they are lonely all or most of the time. And senior leaders are every bit as likely to face loneliness as their teams: half of chief executives report experiencing feelings of loneliness in their role, and 61% believe it hinders their performance.

If you or your team are experiencing loneliness, you are not alone. Loneliness is a universal human condition. It’s not shameful: it’s a signal that we belong together. Loneliness lies at the intersection of inclusion and wellbeing. If you haven’t begun having conversations about workplace loneliness, you soon will, as it is a looming issue for employee engagement and retention. Why? Because the fastest-growing generation in the workforce is the loneliest generation. Seventy-three per cent of Gen Z workers report sometimes or always feeling alone – and 75% of Gen Z (plus half of Millennials) have left a job because of mental health reasons, compared with 34% of other generations.

Not only is loneliness unhealthy, but employee productivity, loyalty, collaboration, and engagement all decrease when employees are lonely and disconnected. Improving team connection is good for workers’ wellbeing and good for business.

While loneliness is increasing, that means it’s malleable. What increases can also decrease. We must put in the effort now to create the connections that lead to better teams, better companies, better communities, and a healthier us.

Workplace loneliness is defined by the distress caused by the perceived inadequacy of our connections to teammates, leaders, the organization, and the work itself. A team member that feels detached from the mission of the organization or has a lack of clarity in their role can experience loneliness.

A framework for reducing loneliness

Think of your team’s and your own wellbeing like the depleting battery of your phone. You don’t have a pleasant conversation with someone once and feel recharged forever. Your wellbeing batteries are always depleting. They need to be recharged regularly. Much like connecting your phone charger to a power source, you must seek meaningful connections with others to increase your wellbeing and protect against the empty battery of loneliness and isolation. 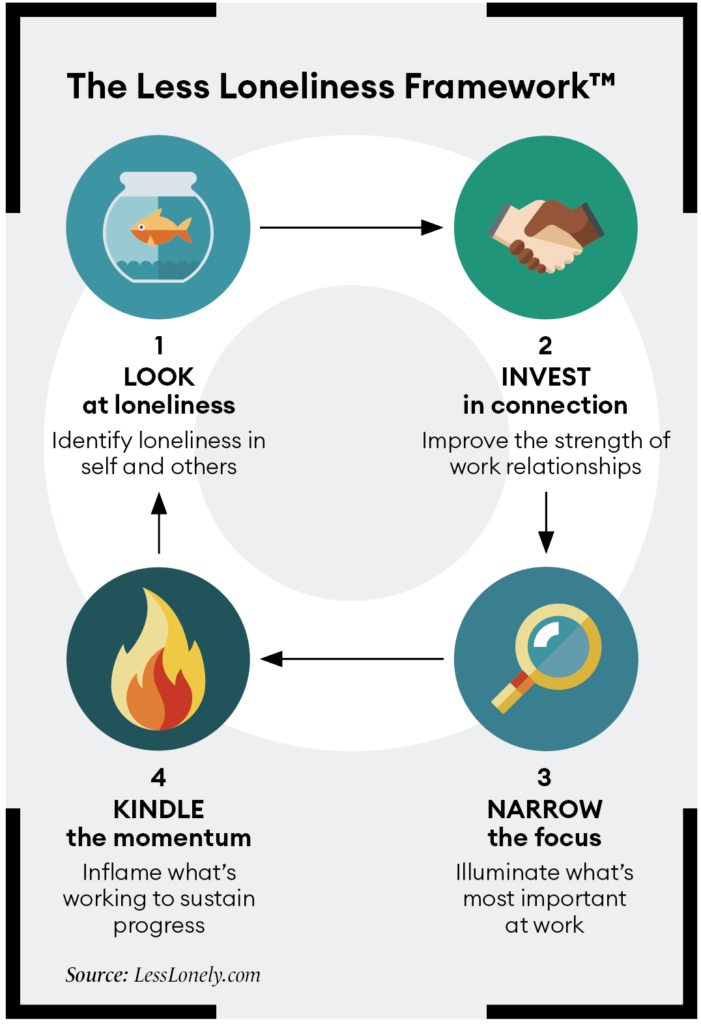 I have developed the Less Loneliness Framework, a four-step process to get your team reconnected, re-engaged and recharged – and like recharging that phone, it is a continual process. Each step is represented by a letter in the word LINK, as it is designed to create stronger links between workers and their team, their leaders and their work.

As with many problems, the first step is to build awareness and understanding – to ‘Look at Loneliness’. Since you are reading this article, you are satisfying that step.

The next step is to ‘Invest in Connection’ and strengthen your team’s connections.

The power of prosocial behaviours

According to psychologists, the best way to lessen loneliness and limit its effects is by using prosocial behaviours. These are acts of comforting, sharing, helping or cooperating, backed by general concern for the feelings, welfare, and rights of other people.

Researchers in China found that leaders who show compassion to their employees can mitigate the negative effects of loneliness and thereby boost creativity.

Another study of workers at Coca-Cola’s Madrid headquarters found leaders were able to reduce feelings of isolation among their team by simply being nice and interacting with others.

The ripple effect of lessening loneliness with prosocial behaviours is gigantic. If your team executes prosocial behaviours, it could ignite similar behaviours throughout your organization and even out in the wider world, leading to healthier individuals, stronger families and more united communities.

Prosocial behaviour is transformational because it is so simple: it only takes you. You don’t necessarily need to persuade other leaders, or get buy-in from your team, or overhaul your company culture. As a leader, you can make subtle shifts that completely change the wellbeing of your entire team.

The healthiest organizations have found a way to have concurrent commitments to human dignity and performance. They don’t sacrifice the wellbeing of employees for high performance. Nor do they sacrifice performance to bend to every employee need. They strike a balance. Lessening loneliness improves both employee wellbeing and organizational excellence. 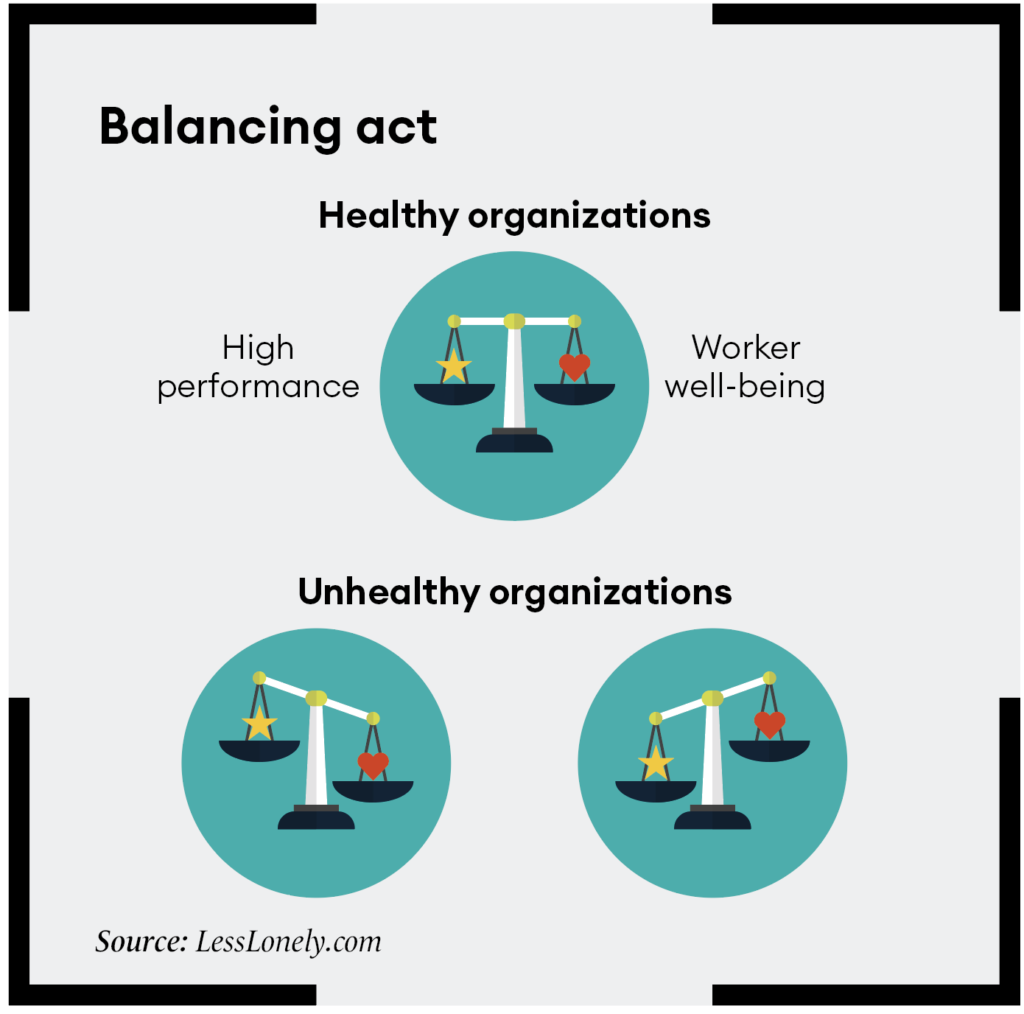 One way to create environments where prosocial behaviours can flourish is by creating psychological safety among a team’s members. It means that people feel free to ask questions, raise concerns, and pitch ideas, without fear of unnecessary repercussions. Psychological safety is invaluable for organizations interested in reducing loneliness among their workers.

When workers feel psychologically secure and protected, their need for belonging is fulfilled and thus loneliness is lessened. Leaders who create psychological safety among a team also reap significant performance benefits: a 12% increase in productivity, 27% reduction in turnover, and 40% reduction in safety incidents, according to Gallup.

Teams can be lonely places. People can feel vulnerable and exposed if they believe their teammates don’t support their ideas or appreciate their work.

These interpersonal struggles intensify for remote workers who lack the support of a nodding ally across the table. It’s challenging for leaders to create psychological safety because by virtue of their role they have power – and power is a barrier to psychological safety. To counterbalance the weight of their powerful role, leaders have to go out of their way to intentionally and strategically build psychological safety. Otherwise, the absence of psychological safety will repress innovation, stunt engagement, slow performance and decrease the strength of connections needed to support mental health among a team.

Psychological safety is the wellspring that organizations need to repair and refresh workers struggling with their mental health. Most leaders need to invest a little more time and energy in creating the conditions for it to flourish.

A simple strategy for less loneliness

When asked, “Where did you learn to be a great leader?” Nelson Mandela, former president of South Africa, explained that he learned leadership from his father, a tribal chief. When Mandela was young, he would go with his father to tribal meetings. He remembered two things. The first was that his father always had his tribal council sit in a circle. The second was that his father was always the last to speak.

When leaders share their thoughts about a topic and then ask for the team’s opinion, it’s too late. By speaking first, leaders undermine dialogue and thwart creativity, because the team will be less likely to volunteer any ideas that conflict with the leaders’ views. The skill of keeping your opinion to yourself until everyone has spoken provides leaders with the authentic and unbiased thoughts of the team. It also provides team members with the feeling that they are heard and valued contributors. To effectively speak last:

Psychological safety exists when team members feel they have the opportunity to speak in roughly equal proportions to their peers – and when leaders start speaking last, they create more space for their team’s voices. Teams where a manager spoke 80% of the time or more were less successful than teams who practise turn-taking during discussions. The goal is ‘proportional conversations’, where each voice can be heard. Encourage these with simple steps:

Gaining more awareness and understanding about workplace loneliness is the crucial first step in cultivating more belonging at work. But as depicted by the circular Less Loneliness Framework (see above), exhibiting prosocial behaviours, like speaking last and conducting proportional conversations, is a continuous process in the battle against loneliness – leaders also need to help teams focus on what matters and inflame what works to build momentum. Considering the results are stronger, healthier and higher-performing teams, it’s well worth the effort.

The power of connectivity

Today’s smart devices are connectable. You can connect your smartphone to a smart TV, wi-fi networks, or a charging station. When a device is connected it becomes more powerful, intelligent and useful.

We are all connectable. However, without the appropriate action from leaders, our collective connectability becomes dormant, stripping humanity of its very essence.

I believe humanity is silently screaming for better connections – and work is the most fertile ground for those connections to spring forth.

With simple, powerful steps, leaders can awaken a renewed sense of connection for us all.

A more connectable workplace is within your reach.

Ryan Jenkins is the author of Connectable: How Leaders Can Move Teams From Isolated to All In (2022). www.lesslonely.com.