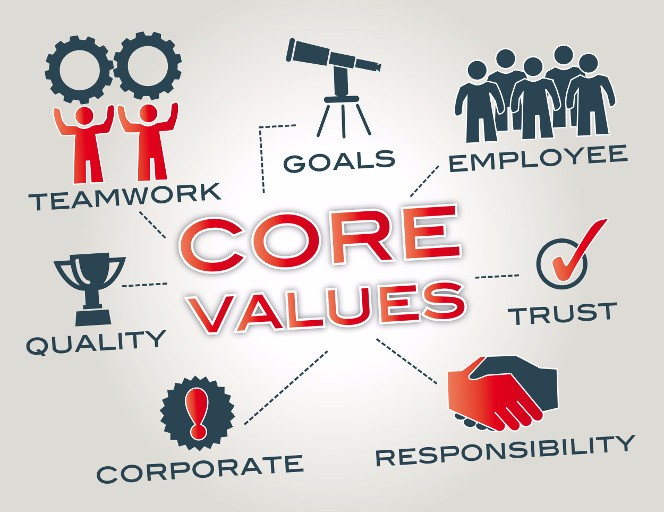 Given how much emphasis is now placed on the importance of corporate purpose, it might seem unusual for a large, modern corporation to lack a set of clearly articulated organizational values. Unfortunately, this remains all too common, and even many of the organizations who do prioritize corporate values have only recently started to verbalize what characterizes their business and the way it operates. And even after a set of values has been established, it’s common to find scepticism about whether values have any real meaning.

The question asked is whether the values have any way of representing the organization’s employees. Do they play a meaningful role in guiding action? In short, do values have any value?

Contrary to what I have heard from some of my peers and former colleagues, my personal experience of embedding and using a set of values at the De Beers Group of Companies was a positive one. Of course, the sceptics are always vociferous. For example, some people asked how it could be feasible to distill the core values of 20,000 people around the world into four or five pithy statements. Wouldn’t those statements be so general that they were rendered devoid of meaning?

Yet despite these misgivings, a couple of anecdotes highlight why I believe there is a place for values. More than that, values are a core necessity for today’s senior manager who needs to find ways to encourage the behaviours that will drive sustained commercial success. Ultimately, I would argue that good values underpin long-term achievement. 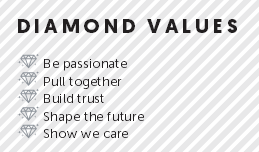 The story of De Beers

We began developing De Beers’ set of values in 2006. The process was leadership-led, supported by interviewing some 200 employees from around the world (including Southern Africa Joint Venture (JV) employees). The outcome was a list of five values: be passionate, pull together, build trust, shape the future and show we care. The first four were strongest among developed country employees, while ‘show we care’ was a clear leading voice of the Southern Africa JV employees, reflecting well-established social responsibility towards the diamond- producing nations and their people.

Once the values had been developed, they were shared with all employees. The most powerful means of sharing was via small workshops, including case studies that provided a dilemma – we chose different cases for different parts of the organization, to make them locally relevant. Each group was asked to reach a decision on the dilemma, explain their reasons and look at each value and its contribution to the final decision. It soon became clear that the values reflected the things that pretty much everyone saw as important in their working lives. This was either through affiliation with personal values or because the values provided common ground to support decisions made at a company level, rather than on a personal agenda.

Were the values so generic that they were meaningless? Not at all. First, we developed detailed statements for each value, so it was unique to De Beers. Second, communicating them widely
and regularly reminded people daily how they were expected to behave. Third, they built pride in De Beers, as they made explicit that the company shared the moral characteristics of those
working for it. Last, but not least, they broadcast to the world that these ways of working were important to us. Being explicit about the values our corporate citizen holds dear helped external stakeholders recognize it as a company with a strong moral compass and helped them see how we had changed.

How did values guide behaviour?

There were many decisions and actions from 2006 onwards where the values helped me and my executive team make the right choices. Here is one example, relevant to many organizations, which helped steer us through crisis, cost-cutting and restructuring.

The unfortunate commercial realities of the 2008 financial crisis had a predictably large impact on a luxury business such as De Beers and we, like many other companies, had to take a number of difficult decisions about our workforce and scope of activities. It was one of the most difficult periods I have experienced as a leader, as I felt the weight of responsibility to so many people that had shown outstanding loyalty to De Beers.

At first we felt powerless to make fair and responsible decisions, but – somewhat to my surprise – my executive team and I found that the corporate values gave us a strong framework for guiding action.

Throughout every tough conversation about employee redundancy packages, relocation activities and departmental mergers, we quickly found the answers once we consulted our values.

‘Show we care’ was particularly relevant. There were some tough choices to be made, and sometimes the values almost competed with one another (especially shaping the future with show we care and pulling together), but using the values as the heart of the conversation was very helpful in demonstrating to everybody why and how decisions were taken.

One of these was a decision to stop a certain activity in our office in South Africa. We knew it would mean making people redundant – in a place where every worker supports eight at home. We had to balance what would be the right thing for the long-term survival of the business with how to work with the government and the needs of employees and the union. We reached a respectable agreement on packages for those who had to leave, while sending some to other African operations.

This clarity about the ‘why’ of our decisions made the ‘what’ more palatable. We cut costs substantially and reduced headcount at the Diamond Trading Company (DTC) by 20%. It was done with respect, dignity and care and was well-accepted by our wider group of employees.

So while it may be tempting to think of values as little more than corporate ‘fluffery’, I would urge you to think again. It’s not necessarily easy to distill your organization’s values down to a few statements, and it may be even harder to generate real employee buy-in. But I truly believe that the effort will prove to be worthwhile.

Values really do have value.

Varda Shine is the former chief executive of De Beers’ Diamond Trading Company, the distribution arm for Rough Diamonds. She is now a non-executive director, C-suite executive mentor and entrepreneur.