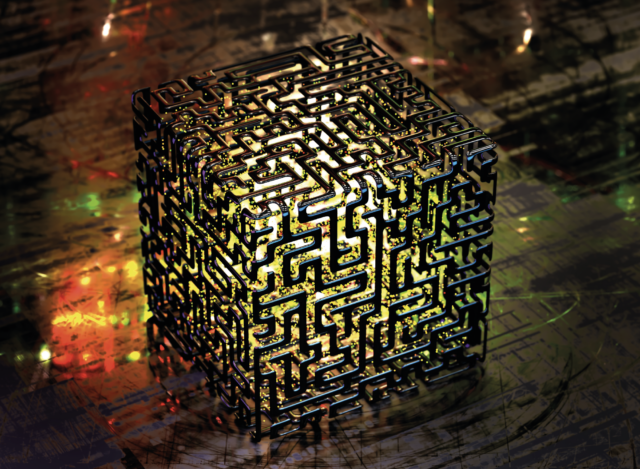 It’s the technology that could revolutionize the computing world. But what is quantum computing, and how could it affect business?

History appears to be repeating itself. Several years ago, when artificial intelligence (AI) was beginning to enter our daily business conversations, there was much confusion over what it would – and wouldn’t – accomplish for businesses.

We are at a similar point with quantum computing. Interest in its potential is picking up quickly, but like AI at a similar stage in its development, quantum technologies seem to be shrouded in mystery. While there is a plethora of publicly-available information on quantum technology, a brief primer is probably useful for those who want to dip a toe into the subject – and understand what it might mean for their businesses in the near future.

It is impossible to explain quantum computing in detail here but an analogy can help. Consider getting through a two-dimensional maze. A regular computer has to run one path after another until it gets to the exit. If, for instance, there are 256 possible paths to do that, the computer would have to try each of them in turn. In contrast, a quantum computer can run all 256 paths at once. The key is that quantum computing is not only processing information exponentially faster, but also handling a wider set of variables simultaneously.

This is where the technology’s signature quantum properties come into play. A classical computer uses bits – that is, binary digits, that are either 1 or 0. However, quantum computing’s qubits can be 1, or 0, or hold a ‘quantum superposition’ of both 0 and 1 simultaneously. That is transformational for the speed at which quantum computers can process complex calculations.

Yet at the current stage of development, quantum hardware is very delicate and can only function correctly under very specific conditions. It will be years before quantum computers can reach commercial scale. In the foreseeable future, at least, new quantum computing devices will be working in conjunction with the plumbing system established by conventional machines. The near future is likely to involve both quantum and classical computing, not one or the other.

There are three important areas where quantum computing is expected to have a substantial impact in the near future.

Cyber-security is probably the most widely-discussed potential disruption flowing from quantum. The reason: the way quantum computing approaches mathematical problems makes it possible to crack the various forms of encryption we rely on today, something that was demonstrated by scientists as long ago as 1994. Although quantum machines have yet to bust today’s encryption techniques, the threat is getting more real as ever more powerful quantum computers come online. Given the importance of cyber-security for business, this could have a significant impact.

For pharmaceutical companies, drug discovery is lengthy, complex, expensive – and often the result of serendipity and luck. Quantum-driven chemical engineering simulation enables scientists to better understand molecular structure and properties, making it easier to select and synthesize the right drug molecules. In fact, simulations also allow them to do so without actually synthesizing them. This could lower R&D costs and reduce timescales for drug discovery.

The fact that quantum can consider all the possible solutions to a problem makes it uniquely capable of dealing with optimization problems, such as maximizing revenue or minimizing costs – especially when a lot of constraints and variables are in play. A wide range of fields can benefit from optimization, including supply chain management, traffic management, circuit design, package delivery, train scheduling, and investment portfolios.

Where are we now?

According to a recent survey, 48% of technology leaders at major British companies believe that quantum computing will play a significant commercial role in their sector by 2025 (EY Quantum Readiness Survey, 2022). Indeed, many of them see the need to establish proof points and strategies in the next two years, because they have a clear expectation that quantum computing will be transformative for their business within the next three to five years.

However, this could be too optimistic. If AI adoption is anything to go by, few companies will rush to take on a new technology, no matter how beneficial it can be – because fully embedding a new technology in company operations often poses significant challenges. These range from technical and IT infrastructure issues, to more general obstacles such as budget constraints and the risks faced if the technology fails. The bottom line is that pragmatism often trumps enthusiasm.

Even though we may be years away from seeing quantum being used at scale, we need to start thinking about its potential societal impacts. Applied to complex optimization challenges in road traffic, travel routes and supply chain operations, quantum could yield big savings in carbon emissions. Its usefulness for simulation should lead to faster drug discovery – perhaps helping us cope with some future pandemic, or fighting back against antibiotic resistance. By identifying new compounds and modelling complex interactions and processes in our body, we have a higher chance of finding new treatments for diseases both old and new. Quantum-based simulations could lead to the development of more efficient processes for producing nitrogen-based fertilizers, which account for as much as 40% of the carbon footprint of a loaf of bread; or for finding cheaper, cleaner alternatives to the lithium-ion batteries that power everything from our mobile phones to electric vehicles.

We are only at the nascent stage of quantum computing. Hardware that can operate at scale economically is still rather remote. But the power of quantum computing is not in the devices but in the ideas for what it can do. Business leaders should start familiarising themselves with the underlying capabilities without delay so that their companies avoid missing out on opportunities emerging from the frontlines.

Quantum technology offers bountiful opportunities to create a better world for us all. For this reason alone, it is worth our while to closely follow the development of this incredible technology and its applications.

Terence Tse is professor of finance at Hult International Business School and co-founder and executive director of Nexus FrontierTech, an AI company.