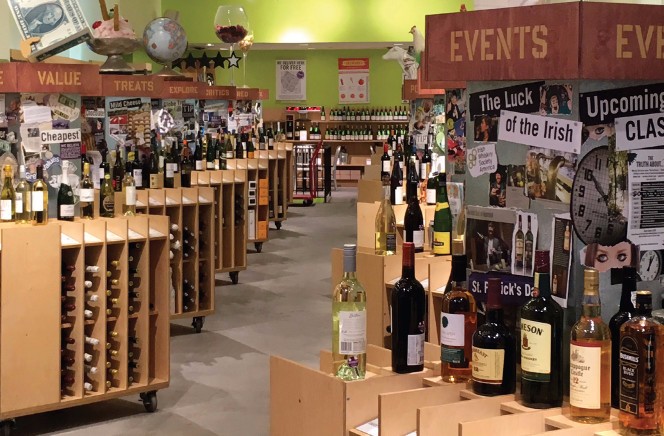 The business model of wine shops is only one example of a wider failure to address consumers’ actual needs.

When I give talks to companies, I often pose the following problem to the audience:

You have been invited to dinner by your boss and, right before you head out, she sends you a text: “Could you bring the wine? We’re having steak.” You don’t know anything about wine, but you do know your boss is a huge wine snob, to the point where she considers people terribly uncultured if they cannot at least pick a good bottle for dinner.

Sensing it would be best to hide your ignorance, you rush into a wine store. You only have a few minutes to make the purchase. What do you do to make sure you pick a good bottle?

My audiences tend to offer a variety of strategies:

The real point of the exercise, however, is to highlight something that people, curiously enough, seem to take for granted: buying wine is difficult. The vast majority of people don’t know much about wine – and yet, the vast majority of wine stores are designed in a way that does very little to help non-experts make a quick, informed choice.

It is quite remarkable, really. There is an entire industry that is locked into one way of selling its products – a way, notably, that does not solve a basic problem the majority of its consumers share.

I mention wine stores because they provide a vivid illustration of a much larger phenomenon that I have seen in industry after industry. When companies look for opportunities to innovate, they tend to look mostly at new technology: “What can we use social media for?” “How about 3D printing?” And so on. This is what you call solution- or technology-driven innovation. At the same time, as in the wine store example, they can seem surprisingly blind even to the most basic pain points their customers face.

Sometimes, this blindness – call it a lack of customer empathy – is not too costly. Wine stores might miss out on some sales, and they often waste your time, but nobody seems to get too aggravated by that. We have somehow grown used to the fact that wine stores are confusing, impenetrable, and politely condescending.

In other cases, though, the lack of customer empathy can have a more corrosive effect on your business. Consider the following observation by Dave Allen, founder of the consultancy BrandPie. Allen points out that some Siemens dishwashers are designed so that when the dishes are done, the dishwasher beeps intermittently until you empty it.

This, surely, was a well-intentioned decision made by Siemens’ product development team. But what Siemens seems to have overlooked is the fact that many people put on the dishwasher right before they go to bed – turning the function into a pretty annoying and uncalled-for alarm clock. To make it worse, the beeping function is notoriously tricky to disable. Given that people keep kitchen appliances for years, you have to wonder how many consumers are, right now, being trained by their dishwasher to feel a slow-burning resentment towards Siemens. And Siemens is not the only company guilty of this error. Which brings an unpleasant question to mind: do any of your company’s products have the same effect on your customers? What is your lack of customer empathy costing you? Because there is no reason to believe your company is not making mistakes of a similar calibre, perhaps without knowing it.

How to reap the empathy dividend

The good news is that, if you can make your company better at spotting these basic consumer pain points, not only can you prevent outcomes such as the dishwasher from hell, but also create better results – and sometimes drastically so. Below, I offer three counterintuitive practices, uncovered through my research, that could help you achieve a better hit-rate with your innovation projects.

As mentioned, when searching for new ideas, people have tendency to look to new technology, asking how they can apply it to their business. They also tend to look to the future, asking “what will our consumers want in three years?” While those are valid areas to look at, they are also risky: the future is notoriously difficult to predict, and new technology is, by its nature, a dicey area in which to dabble. Too often, companies have an idea, build the product or service, and then realize that nobody cares.

A better approach is to take a problem-driven approach to innovation. In short: start looking for problems and pain points that your consumers are facing, and that have not been adequately addressed by the offerings in the market. By starting your innovation process with a really solid, validated problem, you drastically increase the chances that your new product or service will not miss the mark. At the same time, you may discover that your solution can be built with existing technology that you have already mastered, making it even less risky and costly to pursue.

To identify customer problems, many companies rely on actions such as focus groups and incoming customer complaints. These methods are relatively cheap to deploy, and they will, at times, uncover problems that are relevant to product development. However, they also suffer from a significant weakness: they assume that consumers have themselves spotted the problem and are capable of describing it. As the example of the wine shop demonstrates, it’s not only companies that can be blind to problems. There are many problems out there to which customers are blind as well – problems that are entirely unstated, and won’t surface in an interview. More directly observational methods are required to uncover those.

Consider the experience of Samsung’s European innovation team, about which I recently published a case study. When the team decided to take a look at Samsung’s camcorder market, it didn’t just rely on focus groups: members also conducted active field studies, involving small groups of users, equipping them with camcorders and following them around to see what happened.

And there they found an unstated problem that Samsung hadn’t yet addressed: a majority of customers never edited their footage because it was too cumbersome to sort though the filmed material. Customers just assumed editing was a hassle, considering it a fact of life rather than a problem to be solved. Having spotted that pain point, Samsung’s team came up with a creative idea – a bookmarking button that tracks the key moments as you film them, making the editing job easier and even allowing the camera to auto-edit footage. The addition of that function alone made Samsung’s camcorder department go from a negative to a positive bottom line. To come up with better ideas, use methods that let you discover the unstated problems.

Unstated problems are not the only source of potential ideas. Another rich area to mine is problems that are well understood, but that the company believes have already been solved. Sometimes, such problems have not been solved as fully as the company likes to think and, at other times, changes in the customer environment have made the existing solution less useful than it was initially.

This point was also illustrated by the work of Samsung’s innovation team. A few years ago, when you switched to a Samsung phone from a competing brand, Samsung had an app that would automatically transfer all your data and pictures from the old phone to the new one. This data transfer issue was considered a solved problem within Samsung’s Korean headquarters. But, sensing that there might be more to the story, its innovation team ran an experiment in which it paid a small group of consumers to switch to a new phone brand for a month, in return for a payment of UK £300 (US $427).

Through this, the team discovered that Samsung’s existing app was overly complicated to use. In fact, after trying to use the app, several of their test subjects grew so concerned about losing data or photos that they refused to partake in the experiment, opting out of the payment as well. Having spotted the problem, the team built a better app for data transfer that led to more than a million downloads in the first month post-launch, markedly boosting sales of Samsung’s phones. To find value-adding problems, remember to look at the things that are assumed to work well.

How to solve the wine problem

So, you can see how your company’s problem-finding abilities can lead to significant, and at times, relatively risk-free innovation, because your employees become better at understanding the real pain points of their customers.

In my neighbourhood in New York City, there is a wine store called BottleRocket. The owner is a rare vintner indeed, in that he has clearly grasped the problem customers face. BottleRocket has the usual sea of shelves of bottles, catering to wine connoisseurs. But it also has a series of big stands with clearly marked signs labelled ‘Fish’, ‘Meat’, ‘Poultry’, ‘Takeout’ and so on. Under each sign, there are three or four bottles to consider, giving customers the flexibility to make their own selection, while allowing them to make a more informed choice. The shop even has stands with signs for more contextual situations, such as ‘Gifts’, ‘Third Date’ and – thank heavens – a selection of bottles for ‘The Boss’. There is hope.

Thomas Wedell-Wedellsborg is an innovation expert, keynote speaker and author of Innovation as Usual. He has been named one of the world’s 20 most influential international thinkers by HR magazine.