The German multinational engineering and electronics giant Bosch is entering the sensor technology space with a bang.

Bosch, the German engineering and electronics company, is most commonly known as a behemoth in the global household appliance and power tools industries thanks to its market-leading products ranging from washing machines and vacuum cleaners to lawn mowers and electric screwdrivers.

But where the company is growing most rapidly is in the computer chips arena.

In fact, Bosch is well on its way to success, because more than half the cars and mobile phones on the planet already contain Bosch chips. But herein lies a marketing conundrum: because consumers tend to associate these innovations with the car or mobile phone manufacturers themselves, rather than with Bosch, the company has to market itself both to other manufacturers and the general public.

Of course, Bosch is not the first company to face this challenge. Intel became one of the world’s most recognizable computer brands following its long-running Intel Inside campaign.

The campaign launched in 1991 and  a distinctive five-note jingle was introduced in 1994; by its 10th anniversary, it was being played in 130 countries around the world. The concept was simple: at the end of a commercial for a computer brand featuring Intel motherboards, the viewer heard the jingle and saw the Intel logo, highlighting the importance of the components. The campaign sought – and won – public brand loyalty and awareness of Intel processors in consumer computers.

Bosch aspires to be in a position whereby its components are the must-have devices in every car, in the same way that Intel devices are marketed as the essential components in computers. The global technology giant invited Dialogue to visit its Stuttgart headquarters earlier this year to experience its latest technologies first-hand. 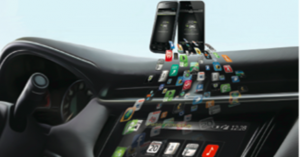 Bosch: Intelligent Software and Sensors – Basis for the Internet of things and services

Internet-enabled products and internet-based services are one of the focus areas of Bosch’s future sales growth. With its hardware know-how and broad technological expertise, Bosch is prepared to move into this direction. President of Bosch UK, Peter Fouquet, explains: “The number of connected devices is rapidly growing and the trend toward networking is unabated.”

Sensors enable technical assistance in day-to-day life. Describing the strategic significance of sensor technology, Fouquet adds: “Whether we are talking about automated driving or the smart home, a new quality of comfort, safety and efficiency is developing, and Bosch is creating the technical conditions for this change.” In 2013, Bosch produced one billion sensors. This year, a further 30% increase is planned. In the mobile phone market, every second smart phone in the world uses Bosch sensors.

In the UK, sensors in Bosch boilers not only help to reduce power consumption as the unit only comes to life when the user is in front of it, but also accurately detects the room temperature, and adjusts flow temperature to meet comfort requirements. When coupled with a smartphone, the sensor knows when the user is in or out of the property. The robotic lawn mower, Indego, which is designed and manufactured in the UK, is packed full of different sensors to ensure it moves systematically all over the garden. It operates using a ”lane-by-lane” approach, rather than the more common randomized pattern used by other robotic lawn mowers, ensuring the same patch of grass is not mowed more than once. Each sensor has a specific function; from managing the rational speed of the blade to control- ling the speed of the lawn mower. Many of the sensors are the same ones that are in cars, mobile phones and games consoles.

The Nissan Qashqai, built in the UK, is fitted with radar sensors, which continuously analyze vehicles in front while the car is in motion. These sensors are part of the predictive emergency braking (PEBS) system, which continually monitors and alerts the driver of a possible rear-end collision, thus helping to reduce the number of accidents and traffic.

Moreover, Bosch is growing in the area of micro- mechanical sensors (MEMS), a key technology when it comes to networking things on the internet. Sensors enable a new form of technical assistance in day-to-day life – in automated driving, for example, or the smart home. Bosch’s strategic objective is to create solutions for connected mobility, connected manufacturing, connected energy systems and connected buildings.