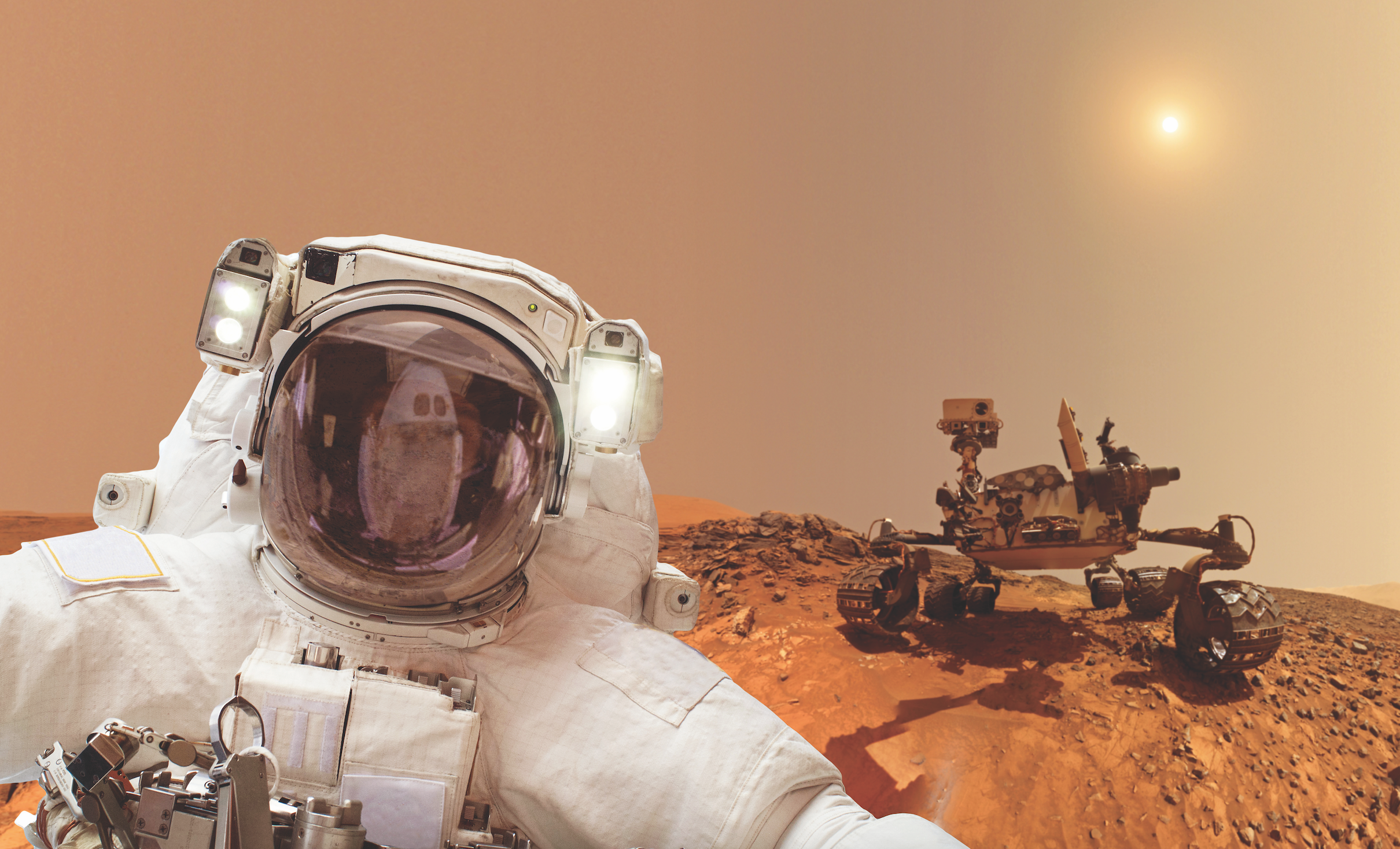 Even in a world of AI and machine learning, the human difference is still a crucial advantage.

Whether they admit it or not, just about every stakeholder in the business world today feels some degree of apprehension – fear, even – about the future of their jobs, their company and their industry.

Think about it for a moment. The human race has never lived through such rapid disruption in how we work and live our daily lives. Within three to four generations we have gone from horseback and steam engines to driverless cars, mobile phones, a few Moon landings and super-powered computers that can outsmart the brightest human minds.

So what do we do when faced with these challenges?

First, let’s go back a few millennia. Our ancestors would have gathered around their new invention – fire. Tribe leaders would start a conversation about the uncertainties they faced and the insecurities they felt. Others in the group would chime in, offering thoughts and concerns.

The modern-day version of a fireside tribal talk is a conference.

The principles are the same. We get together, discuss the latest developments, talk about what this all means for the future and how we feel about it. The great difference is, thanks to the invention of the jet-engine, we also get to fly in some of the leading thinkers on the topic. From the fire breakthrough to the miracle of powered flight, human innovation has led to greater human connectivity.

Fast forward in time to August 2017 when more than 100 delegates from around Africa, Europe, Southeast Asia and the US gather in Johannesburg for a Duke Corporate Education (Duke CE) one-day conference to discuss the key element that will make – or break – the future: humans.

What was the theme that brought everyone together? The Human Difference – Leadership in the Digital Age. Speakers included banking executives, a candidate astronaut, Google and renowned computational neuroscientist Dr Vivienne Ming.

Opening the conference, dean of the Fuqua Business School at Duke University, Bill Boulding, tells Dialogue: “I’d like to see people leave the day totally energized, with a sense of excitement about the opportunity, and energized by the responsibility of being human, and bringing human values into our present and into our future at a point in time when it’s easy with technology to push aside humanity and say, ‘We’re going to replace humanity with robots, machine-learning or artificial intelligence.’”

Duke CE’s Africa President, Sharmla Chetty, echoes Boulding’s remarks. “Our job is to help executives and their teams prepare for change in a constructive and engaging way, and not through fear,” she says.

Chetty adds: “We have seen the results of this approach in the way large corporations suddenly see the opportunities ahead and adapt their organizational culture accordingly to meet the future head-on.”

One woman who exhibits the spirit of which Chetty speaks is Dr Adriana Marais, one of 100 people selected from around the globe to compete for a one-way ticket to Mars.

Dr Marais has signed up to the Mars One project which aims to establish the first human settlement on the Red Planet. “Exploration provides us with the opportunity to find new ways of doing things, new techniques, better and more efficient ideas,” she says. Mars One plans to send several unmanned missions to Mars prior to the arrival of the first humans, the intention being that robots will have built a habitable settlement ready for their human colleagues to populate. Rather than fear a Mars journey, Dr Marais sees it as an unmissable opportunity to use all of humanity’s discoveries to achieve what once seemed impossible. Had she been born 50 years earlier, Mars would have been out of reach.

Duke CE chief executive Michael Chavez says while some embrace this change, others fear it. “Disruption is the driving force of the future” he says, as he leads delegates through a discussion on change.

March of the robots

This is where the fear is rooted. What does change mean? “Will robots take over my job?” many ask. To discuss the question, a panel of representatives of human resources, company learning programmes, and managers of companies around the world, including Cisco, Google, Egon Zehnder, MTN, Anglo American, Nedbank and RCL Foods, were invited to take the stage.

It is a difficult hour. People face the reality that, yes, part of their job would become obsolete. New skills will have to be developed and not all the outcomes are certain. It becomes clear workforce training is needed, and in many industries and companies across this globe this hasn’t even started.

Once again that uncomfortable feeling about the future starts to creep across the room. But not for long. Next, keynote speaker Dr Vivienne Ming takes to the podium.

Prepare for the AI Revolution

Strengthen your mind: -skill up in ‘metacognition’ – emphasize literacy and numeracy in the first five to eight years of life – maintain your cognitive reserve (the strength and speed of your brain) by learning a new language or musical instrument – develop a diverse set of strengths – above all: “Don’t wait for AI to challenge you, challenge yourself.”

Dr Ming is a theoretical and computational neuroscientist, serial entrepreneur and world renowned adviser and expert on artificial intelligence. She has turned down jobs at nearly all the major tech companies, choosing to lead in the digital era rather than follow.

“The world,” she says, “has never changed this fast, and will never be this slow again.” Not a single person moves from their seat or checks their messages. “AI stands for augmented intelligence. Technology should be human-centric… technology should always challenge us. It shouldn’t make life arbitrarily easier – it should make us better.

“AI doesn’t take jobs; it just handles work,” she continues. “Those tasks that are tedious and repetitive, they will be automated. That frees up more time to do more valuable things, to be more human, to do the things AI cannot.”

With a wry smile Ming looks the audience in the eye. “There is only one thing I need from you useless bags of organic slush in an AI future: to explore the unknown,” she says. “Exploring the unknown is outside the capabilities of machine learning. It isn’t about being better than an AI; it’s about being you.”

This may sound philosophical, but Ming has a very good point.

“Software developers get paid a lot of money to solve really interesting problems,” she says. “But they don’t solve problems and make a lot of money because they know how to program, they do it because they are creative, adaptive, problem-solvers. If we force everyone to learn how to program, you won’t build problem-solvers; you’ll build people that aren’t cognizant and don’t know how to use tools.”

And that is the lesson. It is not what we know. It is how we think about the unknown. For many in the audience the penny suddenly drops.

One key characteristic that fundamentally differentiates humans from sophisticated machines is empathy.

Empathy is the ability to understand and share the feelings of others, from the other person’s frame of reference – the ability to place yourself in somebody else’s shoes. This, for now at least, is something that artificial intelligence (AI) cannot do.

To experience and openly express empathy, however, a human brain must exist in an environment that:

In other words, we can only be human in an environment that is conducive to humanity.

And the responsibility of nurturing such environments, Human Difference 2017 conference organizers argue, falls to leaders. 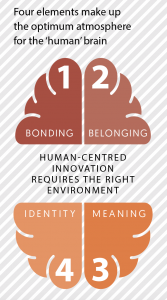 Together with psychologists and behaviour specialists, Duke CE introduces delegates to their new educational course in building the right environment for a human-centred approach: Neuro Signs Immersion. Delegates are handed light-reflective blindfolds and nightclub-style glowsticks on entering the blacked-out, fabric-swathed cavern that houses the experience.

With guidance from the Duke CE team, randomly selected teams are blindfolded then guided through a maze of challenges and experiences designed to break open the mind to expose its human core and permit true, pure innovation.

The immersion delves into human behaviour and the need to create social safety to optimize performance. The Neuro Signs model proposes that the optimum environment for innovation and ‘human-centred’ thinking provides employees with four key experiences: bonding, belonging, meaning and identity (see above).

Earlier in the day they were taken through a step-by-step ‘design school’ problem-solving immersion. Delegates were given a real-time problem and innovation plan carried out by prominent South African bank, Nedbank (see story).

The session takes delegates through the process by using a real-world example: how schools manage parents’ payments
for school activities in an increasingly cashless world.

The Nedbank team, spearheaded by Brinsley du Plessis, explores the problem itself; ideas; prototype and testing; and product release from an empathetic standpoint: considering it from the viewpoints of key stakeholders such as bank, parent, child and teacher.

Duke CE had set up the exercise to take delegates through the various stages of design-thinking:

1. Empathize Get an empathic understanding of the problem you are trying to solve

2. Define Define the problem as a statement in a human-centred manner

3. Ideate As the title suggests, here you generate ideas to solve the problem

4. Prototype Make the solutions to the problem
and experiment

5. Test Test your solution to see if it works. Refine the product or service by repeating any of the steps above to get to a better end goal

As Dr Ming suggests, none of the steps instruct you to learn how to code.

Instead, we must strive to shift our companies, our teams and ourselves to become the creative, adaptive problem-solvers of tomorrow to unlock the new opportunities
that await.

Remember, humans have thrived throughout the ages because of this unique cognitive ability. Don’t be scared.