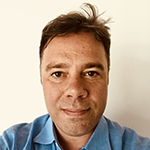 As a Project Director at Duke CE, James assists with the design and delivery of innovative developmental and educational solutions for a variety of global clients. He plays a pivotal role in collaborating with Duke CE’s l faculty and teams to manage the client relationship, instructional design, budget and operational direction of customised leadership development programmes.

Prior to joining Duke CE, James served as an Infantry Officer in the British Army for over 16  years. During this time he travelled extensively to postings in Kenya, Germany, Canada, the USA, and the Falkland Islands. In addition he undertook six operational tours in Northern Ireland, Kosovo, Sierra Leone, Iraq and most recently in Afghanistan where he led a 170 strong combat unit in Helmand province.

Since leaving the Army as a Major in 2013, he has managed various regulatory change projects for BNY Mellon and Barclays and came to Duke CE from Coutts Private Bank, where he worked as an Associate Director in Change Management.

James holds a BA and MAfrom Kings College London. He is a Nordic and downhill skiing enthusiast whose other interests include sailing, classical history and learning Farsi.