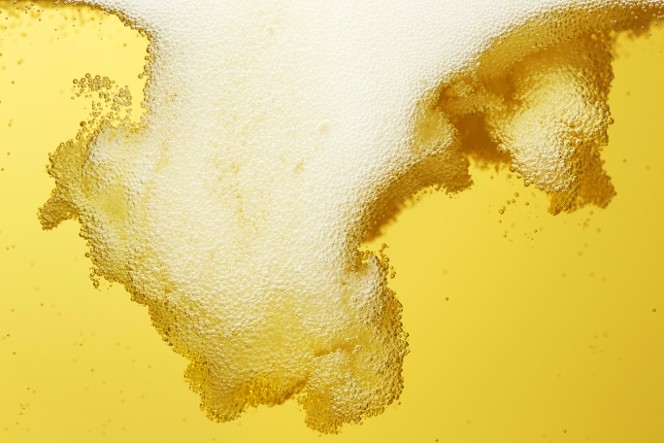 M&A transactions and other shake-ups can be extremely disruptive for employees. SABMiller’s Jayne Antrobus and Samantha Rockey share their experience with guiding employees through major transitions – and coming out stronger on the other end.

In one of the top five largest transactions of all time, in 2015, the boards of Anheuser-Busch InBev (ABI) and SABMiller announced that they had reached agreement for ABI to takeover SABMiller. The transaction, valued at around $117 billion, was extraordinarily complex. Before the offer could be put to shareholders, regulatory approval was required from the European Union, South Africa, the US and China, as well as several other countries.

SABMiller’s senior leadership, led by chief executive Alan Clark, knew the acquisition would be traumatic for the business, particularly for the thousands of employees whose jobs were at risk. In addition, the nature of the offer meant SABMiller was no longer in control of its own destiny. This fact, combined with the profound nature of the expected change, left the business vulnerable to leadership and workforce disengagement. So the company’s executive committee set two priorities:

The HR team realized the organization needed a means of delivering on these priorities. As a result, the People Plan was developed, with four steps to success.

“People remain my number one priority. Selling more beer and staying focused on hitting our targets and beating the competition is a very close second.” – Alan Clark, SABMiller chief executive

For the target organization, a corporate takeover is invariably traumatic. The effect on managers and employees has even been given a name – Merger Syndrome. Among its symptoms are raised stress levels, rumor mills, mistrust, a loss of motivation and commitment, and decreased productivity.

Clark’s statement above, which coincided with the 2015 takeover announcement, was clear cut. But how would leaders demonstrate the intent behind the sentiment? The initial focus was on acknowledging the uncertainty, its likely duration and, where possible, clarifying the things leaders could guarantee for employees to reduce it. For example, putting a process in place to determine what work would stop, continue or start anew, offering enhanced employment terms for all, and retention bonuses for key talent.

At an individual level, performance management was also a challenge. A prime example was how to deal fairly with people who had been set performance goals relating to projects that had changed as a result of the transition. Instead the performance appraiser was given other measures by which to assess the individual, such as how they dealt with the change in their circumstances.

Goal-setting for the 2016/17 financial year was especially problematic, given the certainty that at some point in that period the takeover would either be completed or abandoned. The solution was to shrink the goal-setting horizon to enable rolling quarterly goals. This allowed goals to have resonance with the immediate tasks ahead, as well as the flexibility to be altered as circumstances around the transaction changed.

The primary challenge for leaders was to sustain and even enhance the behaviors that had helped to create such a successful business. Within the People Plan, the pragmatic approach to leadership development manifested itself through a number of key deliverables. The first was a workshop entitled ‘Leading in Challenging Times.’ Its primary purpose was to allow leaders and their teams to be open about their feelings regarding the transaction, while giving managers a basis on which to maintain those conversations as the transaction progressed. These discussions proved powerful in maintaining and enhancing the sense of trust between employees and managers. Having identified concerns and issues, they allowed space for leaders to address these where possible. Where it wasn’t possible, the act of simply acknowledging them enabled teams to maintain their focus.

The workshop also drew attention to a newly launched online ‘Leadership Toolkit,’ which provided a repository of information and resources to help leaders build their own and their team’s resilience. It contained materials ranging from short YouTube clips to in-depth expert papers. There were also instructions and support materials for practical activities the leader could work through with his or her team.

To further avoid the risk of pushback, the toolkit was not imposed on its audience. Instead, the underlying message of its communication programme was “it is there if you want it.” However, it was publicized using vignettes exploring how line-leaders had used the tools and the value they had derived from them.

One of the identified causes of the Merger Syndrome is less top-down communication, leading in turn to an overactive rumor mill.

SABMiller’s guiding principle was for communications to remain line-leader-led, and to become even more people-centric. This included, for example, ensuring that leaders spoke more frequently with employees – praising them for going the extra mile; enabling leaders to support employees to share their feelings; and supporting leaders to answer employees’ questions as honestly as possible.

The reason the communication plan worked was that the level of emotional engagement was ramped up: senior leaders focused on personal interactions with employees affected by the transition, and line managers were encouraged to step into a more emotionally open approach. For a task-focused, performance-based business this was not an easy shift.

In addition, listening groups were held regularly across the organization to garner qualitative feedback. These groups specifically excluded management, allowing for open and honest dialogue. The anonymous input from the sessions provided useful insight into what was being talked about on the grapevine, and was then used as a springboard to coach line-leaders on what they needed to do more or less of. 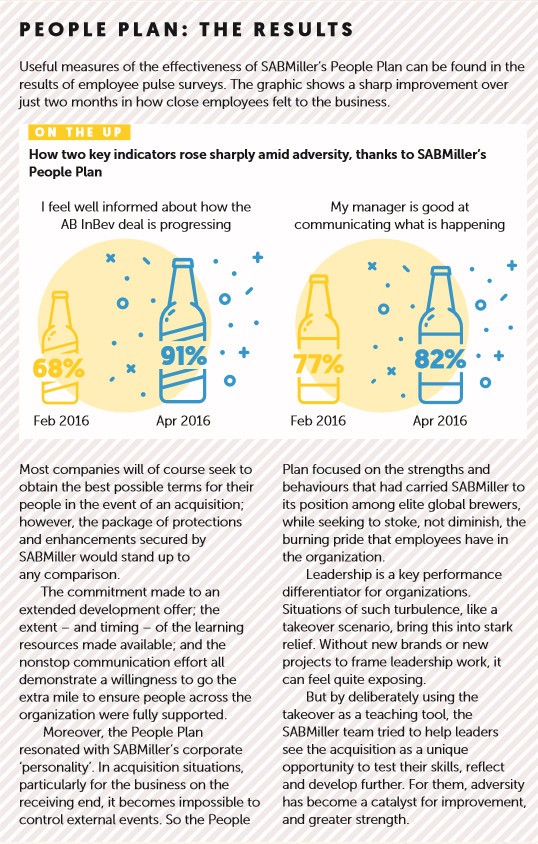 In all cases, the communication output encouraged SABMiller people to look upon the situation as an opportunity not a threat, with a relentless focus – underscored in Alan Clark’s personal communications – to look forward not backwards, and to focus on future opportunities.